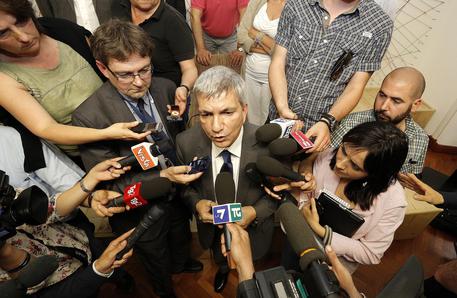 (ANSA) - Rome, June 25 - The head of the leftist SEL party on Wednesday denied his party was splitting up after two more members resigned. "There's no such split taking place," said Puglia Governor Nichi Vendola as he entered a party meeting. "SEL is alive and is rebooting starting today".
Earlier Wednesday, Alessandro Zan, Fabio Lavagno and Nazareno Pilozzi formalized their resignation. Moments later, SEL treasurer and MP Sergio Boccadutri left the party to join the ruling center-left Democratic Party (PD) of Premier Matteo Renzi, who came away with over 40% of the popular vote at European elections last month. Vendola added that SEL "will not run after the bandwagon of the winner because Italy needs an autonomous left". So far eight members have resigned from SEL in the last week amid divisions over the government's income-tax law giving low-income earners an 80-euro bonus. The party line was to abstain. Most of those leaving the party intend to join the Mixed Group in parliament. At the SEL meeting Wednesday, Vendola said he and the rest of the party leadership would be offering their resignations, if the membership agreed. "None of us is glued to our posts," he said.