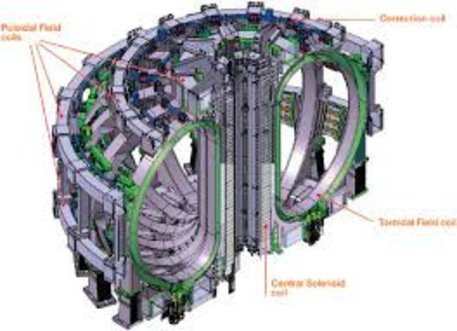 (ANSA) - Rome, June 25 - The European Union's Fusion for Energy (F4E) organization has signed a five-year, one-billion-euro contract with Italian high-tech engineering company Simic SpA to produce key components of ITER, a massive nuclear fusion reactor being assembled in the south of France, F4E said in a statement Wednesday.
ITER ("the way" in Latin) is a large-scale scientific experiment to try to harness fusion energy as a sustainable long-term alternative to fossil fuels. Born at the Geneva Superpower Summit in November 1985, the ITER agreement was officially signed by China, the EU, Japan, India, Russia, South Korea, and the United States in France in 2006.
Together, these seven partners represent over half of the world's population.
Simic will produce 10 toroidal field coils, or gigantic superconducting magnets whose main task will be to create a magnetic cage within which to confine the reactor's superhot plasma, whose temperature is expected to reach 150 million degrees Celsius.
The challenge is to keep it burning without letting it touch the walls of the reactor. Each TF coil is 15 meters high, nine meters wide and 1.2 meters across. It weighs approximately 340 tonnes, the same as six Boeing 737-800 planes. Together, the reactor's 18 TF coils will produce a magnetic field equal to 11.8 Tesla, or one million times as powerful as the Earth's magnetic field, according to F4E.
Europe is responsible for manufacturing 10 out of ITER's 18 TF coils.
"This is an impressive achievement that enhances the proven track record of our company and places Italian manufacturing among the most skilled in the world", said Simic Commercial Manager Marianna Ginola.
"Thanks to this contract, the last and most decisive chapter of the TF coils manufacturing is about to be written. We will produce magnets of unprecedented size and power, following extremely complex techniques", said F4E Director Henrik Bindslev.
Based in Barcelona, F4E was established under the Euratom Treaty by the European Council in 2007 for a period of 35 years.