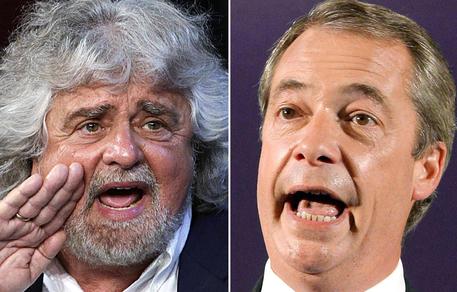 (ANSA) - Brussels, June 18 - Nigel Farage, leader of the United Kingdom Independence Party (UKIP), said Wednesday that with 17 members of Italy's 5-Star Movement (M5S), he will form a Euroskeptic group in the European Parliament. M5S Leader Beppe Grillo called it "a great day for direct democracy".
Rules require 25 MEPs from seven different nationalities must be included to form a group within the European Parliament.
"We will be the voice of the people," said Farage, whose group will include 24 British members of the European Parliament, as well as members from Lithuania, France, Sweden, the Czech Republic and Latvia.
In last month's elections for the European Parliament, Euroskeptic parties tended to do very well in almost every country except Italy, where Premier Matteo Renzi's centre-left Democratic Party (PD) swept more than 40% of the vote.
That was almost twice as much as Grillo's M5S won.