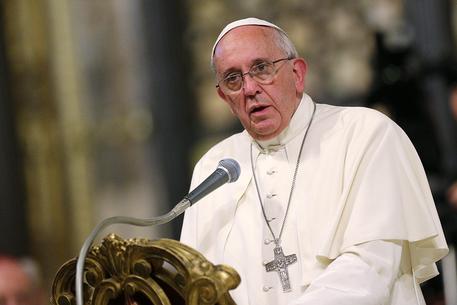 (ANSA) - Vatican City, June 17 - Pope Francis has apologised for corruption by Catholic clergymen, admitting that the problem affected prelates in some cases. "When we read in the newspapers that this person is corrupt, that this other person is corrupt, that someone has done this act of corruption and that bribes go here and there and many things by some prelates, as Christians it is our duty to ask forgiveness for them and ask the Lord to give them the grace to repent, so they don't die with a corrupt heart," he said on Tuesday.
The Vatican administration and its bank have been hit by several scandals in recent years. Among the cases to hit the headlines was the 2013 arrest of prelate Monsignor Nunzio Scarano.
Scarano, the former head of analytic accounts at the Holy See's asset-management agency APSA, is suspected of involvement in the laundering money of through accounts at the Vatican Bank and of trying to illegally smuggle 20 million euros into Italy for friends. The pope was speaking Tuesday in his morning Mass at the Santa Marta guest house where he lives in the Vatican, having spurned the space and comfort of the papal apartments.
He said that the corrupt kill and steal while "wearing white gloves, from far away, without getting their hands dirty".
Tuesday's was just the latest statement on one of the leit motifs of Francis's papacy since he was elected to replace Benedict XVI in March 2013.
Just over two weeks ago, on June 11, he issued one of his most thunderous condemnations yet of political corruption, saying dirty pols and their dodgy business associates would face an ultimate reckoning with God.
The denunciation was seen as extremely topical for Italy as the country stumbles from one graft scandal to another, whether involving next year's Expo flagship world's fair in Milan or surrounding the huge MOSE dams in Venice.
It also came after repeated criticism of the dark side of global capitalism, critiques that have spurred media outlets ranging from Time to Rolling Stone to hail him as a Jesus-like revolutionary.
The corrupt should "never forget" that they will have to reckon with God, Francis said at Wednesday's regular weekly general audience in St Peter's Square.
"They will not take with them their money or their power or pride," Francis told some 10,000 people at the audience in a baking-hot St Peter's.
Francis warned corrupt persons in positions of power that they would "do well to fear God's justice and repent" during a portion of his address dedicated to the seventh and final of the gifts of the Holy Spirit: fear of the Lord.
"Departing repeatedly from his prepared text in Italian for emphasis," Vatican Radio said, "the Holy Father spoke of the fear of the Lord, not as a servile or supine disposition before the Lord, but as the grateful response of people who have first been loved by the infinite love of God the Father".
Francis added that arms manufacturers and people traffickers are likewise "unhappy" and will face a similar divine reckoning. @PONTIFEX OVER 14-MILLION MARK.
Also on Tuesday, Pope Francis's Twitter following crossed the 14-million mark, Vatican news website Il Sismografo reported.
The most popular of the nine @Pontifex accounts in different languages is the one in the Argentine pontiff's native tongue, Spanish, with 5.94 million followers. That is followed by the English version with 4.15 million, while the Italian one is third with 1.75 million.
There are also versions in Latin, German, Portuguese, Polish, French and Arabic. http://popefrancisnewsapp.com/