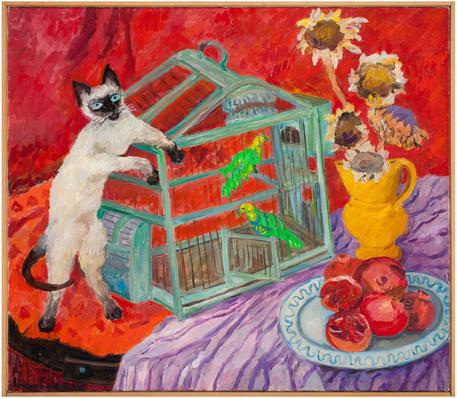 (ANSA) - Rome, June 16 - A show of early 20th-century Italian Jewish women artists highlights their condition as a minority, in the year in which the 15th European Day of Jewish Heritage takes as its theme 'Women in Judaism'. From the Modigliani sisters to Adriana Pincherle and Antonietta Raphael, this beautiful exhibit of 150 works by 15 artists runs through October 5 in Rome's Modern Art Gallery (GNAM).
Titled 'Novecento Women Artists Between Jewish Vision and Identity', the show not only displays the undoubted talent and individual personalities of these artists, but also traces the social and cultural milieu in which they grew and flourished, allowing viewers to reconstruct the artistic environment of the first decades of the 20th century between the academy and the avant-garde.
And while women were penalized as a gender and Jewish women doubly so, they also benefited from the strength of their families and their tradition, which places a high value on education for both sexes.
''There was no illiteracy in Jewish families, as both boys and girls had to study in order to be able to read the Torah'', explained one of the curators.
Such was the case of Annie Nathan (1878-1946), whose father Ernesto was the mayor of Rome for six years, and who grew up in a cosmopolitan environment imbued with the republican and democratic ideals of Giuseppe Mazzini, one of modern Italy's founding fathers.
Nathan studied with Giacomo Balla, in whose school she learned to ''paint reality from reality'', entrusting her vision to pure and vivid colors. She died in Switzerland, where she fled Italy's anti-Semitic racial laws.
Corinna Modigliani (1891-1959), a second-degree cousin to the better-known painter and sculptor Amedeo, studied in the atelier of Pietro Vanni and was also influenced by Balla, her landscapes and portraits of children swimming against backgrounds of chromatically interacting patches recalling the master's Divisionist period.
Like Corinna, her younger sister Olga (1873-1968) embarked on what was at the time considered an unconventional lifestyle, eschewing marriage in favor of travel and art. An undisputed master of ceramic decoration, her work was exhibited at the 1914 Venice Biennale and featured in both private and public collections.
Turin-born Paola Levi Montalcini (1909-2000) is represented with early work from the 1920s, when like most of her city's avant-garde she was influenced by Felice Casorati. There are also paintings from her Abstract Expressionist period, and canvases from the 1970s, when she explored the limits between art and mathematics. The last two exhibition halls are dedicated to the two most prominent Jewish women artists. Pincherle (1909-1996), the elder sister of renowned Italian novelist Alberto Moravia, studied the Impressionists in Paris and was heavily influenced by Henri Matisse, whose flat perspectives and vibrant palette infuse her lovely portraits and still lives.
Raphael (Lithuania 1895-Rome 1975), whose paintings and sculptures are a testament to her undisputed talent, was ignored by critics until the 1950s, when she finally gained recognition for her artistic output between the two world wars. Curated by Marina Bakos, Rome Jewish Museum Director Olga Melasecchi, and Federica Pirani, the show is promoted by the Rome department of culture, the Capitoline superintendency, the non-profit Foundation for Jewish Cultural Assets in Italy, and the Rome Jewish Museum.
photo: Adriana Pincherle, Cat and Parrots, 1984