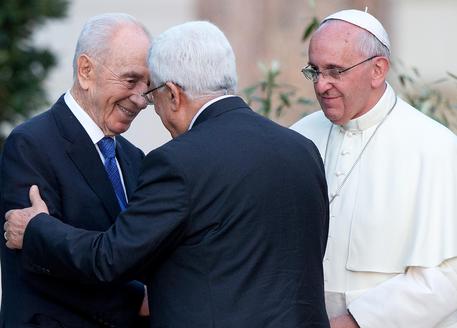 (see related) (ANSA) - Vatican City, June 13 - Virtually everyone in the Holy See was skeptical about Pope Francis' invitation to the Palestinian and Israeli presidents to attend a prayer meeting in Vatican City, the pontiff said Friday. "Some 99% of them said we shouldn't do it," Francis told Spanish daily La Vanguardia. "I heard from people we were overreaching...then the 1% grew". On Sunday, the pope welcomed Israeli President Shimon Peres and Palestinian leader Mahmoud Abbas to the Vatican Gardens for prayer after making a surprise invitation during his visit to the Holy Land last month.
The Vatican said the success of the event was symbolized at one point in an embrace shared by Abbas and Peres.
According to Francis, he decided to visit the Holy Land in light of Peres' upcoming retirement later this summer. "I knew his term was coming to an end. One way or another, I had to visit him first," said the pope.
http://popefrancisnewsapp.com/