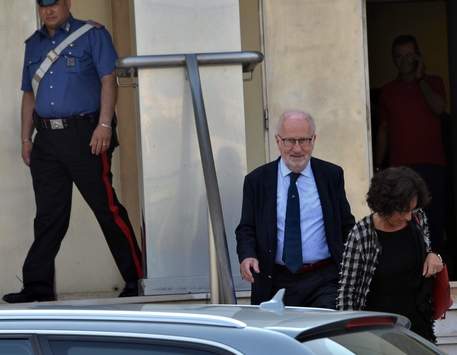 (ANSA) - Venice, June 12 - Lawyers representing Venice Mayor Giorgio Orsoni have reached a plea bargain with prosecutors over his alleged role in corruption linked to the MOSE flood-protection system, sources said Thursday. The centre-left politician agreed to accept a four-month prison sentence, the sources said, and a judge will decide whether the deal is acceptable.
Orsoni, who is being probed for illegal financing of political parties over his 2010 city election campaign, was released from house arrest by a judge earlier on Thursday. He said that he would return to his position at the helm of the city council and had no intention of retiring.
"I have made many enemies and maybe this is the price I'm paying," Orsoni, told a news conference. "I couldn't know that an illegal system was used (for the 2010 campaign)," he said, adding that he has assigned fund-raising to third parties.
Orsoni was among 35 people arrested earlier this month over the MOSE probe, while around 100 others are under investigation.
These include former Veneto governor and ex-minister Giancarlo Galan, currently a Senator for ex-premier Silvio Berlusconi's Forza Italia (FI) party, and Altero Matteoli, a former centre-right environment and transport minister.
Prosecutors are looking at allegations a corruption scam saw 25 million euros in taxpayers' money funnelled to political campaigns and away from MOSE, a 5.5-billion-euro system system of retractable dikes set to be operable in 2016 after decades of delays. The MOSE scandal broke less than a month after other high-profile arrests over alleged corruption on contracts for Milan Expo 2015. Renzi has vowed to pass legislation to combat graft after the case, including a move to give greater powers to national anti-corruption chief Raffaele Cantone. He has called for life bans for politicians involved in corruption, saying this is a form of "high treason".