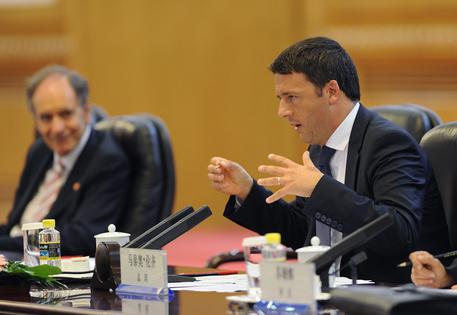 (ANSA) - Rome, June 12 - Premier Matteo Renzi will have to handle an internal revolt over his planned institutional reforms from within his centre-left Democratic Party (PD) when he cames back from a trade tour of Asia on Friday.
A group of 13 PD Senators suspended themselves from the parliamentary party on Thursday after one of them, Corradino Mineo, was taken off the Upper House's constitutional affairs committee because he was not toeing the government's line.
The rebels says the decision to replace Mineo with the PD's Senate whip Luigi Zanda on the commission is unconstitutional.
The government's plan to overhaul Italy's slow, costly political apparatus includes a revamp of the Senate to turn it into a leaner assembly of local-government representatives with minimal law-making powers to save money and make passing legislation easier.
Mineo, however, is part of a minority within the PD who want the Senate to continue to be an elected assembly.
"We won't give up half a centimetre," Renzi, who got an big endorsement for his institutional and economic reform plans when the PD won over 40% of the vote in last month's European elections, said during a meeting with Italian entrepreneurs in Beijing Thursday.
"We are convinced we can change the country. You don't announce reforms, you carry them out, and we aren't giving anyone the right to veto.
"The votes of the Italian people count more than some politicians' right to veto".
Renzi also has problems with ex-premier Silvio Berlusconi over the reforms, after the head of the opposition centre-right Forza Italia (FI) party said he is rethinking his initial support for the institutional reforms.
The premier may soon meet again with Berlusconi, whose initial support was sealed at an encounter in January, a month before Renzi unseated his PD colleague Enrico Letta to become Italy's youngest-ever premier at 39.