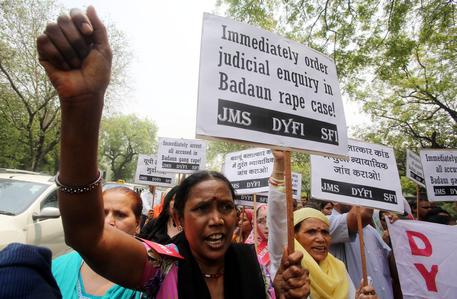 (ANSA) - New Delhi, June 12 - The northern Indian state of Uttar Pradesh is the "capital of violence against women," a local news agency said Thursday after another body was found hanging from a tree in a village there.
The body of the 16-year-old girl was found on the outskirts of Moradabad, Zee TV reported, one day after another female body was found in similar circumstances in the same state.
India is undergoing a jarring epidemic of reported sexual attacks on women, with Uttar Pradesh dominating the map over the past month.
In one instance a 15-year-old girl and two female cousins were found raped and hanged in different areas. In another, a female judge was drugged, raped and seriously injured in Uttar Pradesh.
The media have paid increasing attention to sexual violence in India since the 2012 gang rape and murder of a student on a Delhi bus.
Last year the government tightened rape laws after widespread protests but the tide of sexual violence has not abated.
In the case of the latest victim, there is no confirmation on circumstances of death nor whether the victim was the victim of sexual violence, Indian Asian News Service IANS said.