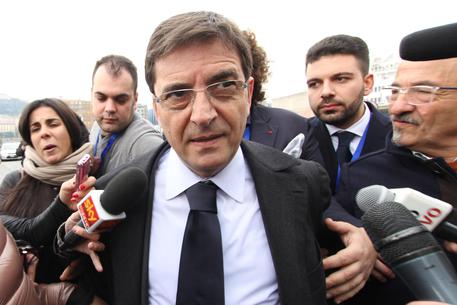 (ANSA) - Caserta, June 4 - The allegedly Camorra mafia-linked politician Nicola Cosentino, a former undersecretary to three-time premier Silvio Berlusconi, was "our thing" said a Camorra informant in a Caserta courtroom on Wednesday.
In a judicial meeting, Camorra clan member and informant Roberto Vargas described Cosentino as "cosa nostra" (our thing), a reference to Mafia membership and said that the politician had met with Casalesi head Francesco "Sandokan" Schiavone to talk about contracts and politics.
"Cosentino met with Sandokan after his release in 1993 and before the Spartacus raid (1995). The two met in the warehouse annex of Vicenzo Cantiello's shoe shop. (Cantiello is a relative of boss Salvatore Cantiello). Cantiello told this in 2003 after he left his cell. Then in the course of the years, Nicola Schiavone (son of Sandokan) told me many times that Cosentino was 'cosa nostra'", said Vargas.
Vargas also said that Cosentino took care of the bribes to companies building the Sparanise power station near Caserta.
"Nicola Schiavone told me that we should not do anything because Cosentino had closed the deal with a bribe of 20 thousand euro each month, delivered into the hands of the cashier of the Nicolino Panaro clan".
Cosentino was arrested in April along with 12 others for alleged extortion and unfair competition in favor of his family petrol-pump business in the southern Campania region Also on his rap sheet is a March 2013 arrest on suspicion of collusion with the Neapolitan mafia for alleged links with the powerful Casalesi clan whose death threats have forced anti-mafia writer Roberto Saviano into 24-hour police protection.