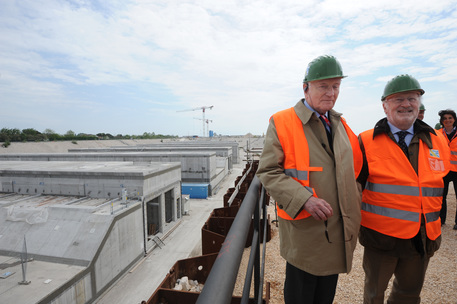 (ANSA) - Venice, June 4 - The mayor of Venice was among 35 people arrested Wednesday in an unfolding multi-million-euro corruption scandal, one that includes a Berlusconi-era minister in an alleged scheme that funneled bribes to political campaigns through the lagoon city's flood-protection system over the course of a decade.

Lawyers representing Giorgio Orsoni were quick to deny charges against him, a member of Premier Matteo Renzi's center-left Democratic Party (PD), who as a sitting mayor was among the most startling names to appear in case files that spanned 700 pages, outlining crimes ranging from bribery and extortion to money laundering by a panoply of public officials.

Prosecutors also requested the arrest of former Veneto governor and ex-minister Giancarlo Galan, currently a Senator for ex-premier Silvio Berlusconi's Forza Italia (FI) party, meaning the Upper House will have to vote on whether to authorise the arrest.

At the center of the alleged bribery web is Consorzio Venezia Nuova, a consortium of private and government entities responsible for safeguarding the Venetian lagoon, which includes MOSE, a 5.5-billion-euro system of retractable flood barriers set for completion in 2016 after years of delays.

According to investigators, the consortium gave Galan a lump-sum bribe of 800,000 euros on top of one million euros in annual salary via Giancarlo Mazzacurati, the former head of the consortium, and Veneto Infrastructure Councillor Renato Chisso, between 2005 and 2011.

The case files call Mazzacurati, arrested last summer, the "grand puppeteer" of the alleged campaign-bribery scheme. Chisso was among those arrested Wednesday.

Even a top tax cop, now-retired Finance Guard General Emilio Spaziante, was promised 2.5 million euros to influence inspections and criminal probes on the MOSE flood barriers, according to his arrest warrant. Spaziante eventually received half a million euros which he allegedly split with two of the other people arrested, the warrant said.

The MOSE investigation comes as investigators probe other graft allegations in northern Italy. Last month police uncovered a suspected criminal network that organised bribes in exchange for contracts to work for Milan Expo 2015, or the World's Fair.

Both cases have put pressure on Premier Renzi, who appointed an anti-corruption czar in response to the Expo scandal and growing popular disenchantment with the ruling class.

One Venice prosecutor said the case there involved some of the same politicians involved in the Bribesville probes of two decades ago, which brought down the old party system. "We've found the same suspects from the 1990s," said Carlo Nordio, who played a role in those investigations as well. This time, the web of bribery in Venice is much more sophisticated, he said.

Police said the Venice probe has been in the works for several years, sparked by another investigation into alleged bribery linked to road work along the A4 highway. The head of the company involved, Lino Brentan, made a plea bargain in that case. On Wednesday he was among those arrested in the MOSE case. In the highway probe, police said they uncovered at least 20 million euros in slush funds in San Marino and Switzerland, allegedly at the hands of Piergiorgio Baita, a former manager of Mantovani, the principal construction firm involved in MOSE.

Also linked to the current probe, but not under investigation, is Altero Matteoli, a former Berlusconi transport minister.

The MOSE project, which in Italian is a play on the name for Moses, has been contested since its inception in 1984. Environmentalists say the series of retractable dykes will interrupt the natural ecosystem, and some experts believe it will fall short of protecting the city from disastrous floods despite the billions poured into it.