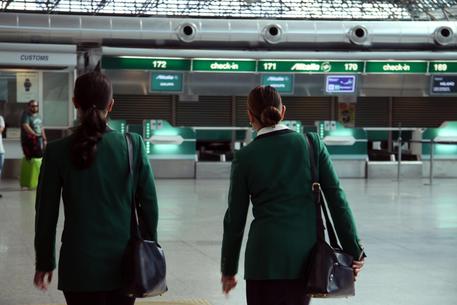 Between 2,400 and 2,500 layoffs are expected at Italian flag carrier Alitalia once a major investment deal has been made final with Etihad Airways, Italian Labor Minister Giuliano Poletti said Tuesday. "At least with regard to those in the public sector. Then we will have to see, once there is substantial discussion between the two parties," he said. Those workers whose contracts fall under the auspices of the infrastructure ministry "will be taken care of under our social safety net," he added, noting however that some cases are complicated. "Different contacts fall into different categories of social security," he said. "There's ground personnel and there's flight personnel. Then there's a previous plan, which is still active, in which a group of laid-off employees are receiving state-subsidised benefits". As for this last group of employees, "the entire situation needs to be reconsidered," he said. For weeks it had been rumoured Etihad planned to invest as much as 550 million euros in cash-starved Alitalia if certain conditions were met on restructuring the Italian carrier's debt and staffing levels.
But talks had been held up, reportedly in part by the Gulf carrier's demands that Alitalia cut jobs.
On Sunday, the two airlines announced they were near an agreement. Neither airline have discussed the terms of Etihad's planned offer or comment on media reports about the possible conditions demanded by the United Arab Emirates carrier for the investment that would give it a 49% stake in Alitalia.
The deal would give new life to the Italian carrier which was subject to a government-led bailout last fall - the latest step in Alitalia's attempts to restructure itself over the last several years as it struggles to remain competitive.