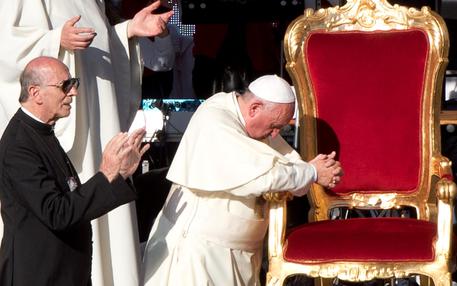 (ANSA) - Rome, June 3 - Pope Francis is not "letting go" of the Institute of Religious Works (IOR) and is monitoring personally the institution better known as the Vatican bank.
After wrapping up his demanding and fruitful visit to the Holy Land, in fact, Bergoglio has plunged back into domestic "affairs", first and foremost IOR which he has kept as a "bank" while renewing its mission so it is more closely connected to its specific objectives.
In particular, ANSA has learned, two high officials recently appointed to their posts who were already working at the bank when Angelo Caloia was president, have been sent into early retirement. Caloia's successors were Ettore Gotti Tedeschi and currently Ernst Von Freyberg.
The early retirements made a big stir behind Vatican walls because they were perceived as a new acceleration into the institute's reform with the old IOR management being laid off without much warning.
These steps were taken after work carried out by the pontifical commission chaired by Raffaele Farina and the pontiff's approval of a reform "proposal" drafted with the cooperation of IOR's Freyberg and US-based international consulting and auditing firm Promontory, which was hired as a regulatory consultant.
The pope's objectives in making such progress are now becoming clear: The Vatican bank must no longer create the financial scandals that have cast a shadow on the Catholic Church, as occurred in the cases of Monignor Nunzio Scarano, a former head of analytic accounts at the Holy See's asset-management agency APSA, which is indirectly linked to the Vatican bank, and of the former bishop of Siena, Monsignor Gaetano Bonicelli.
In order to reach this purpose, Bergoglio has encouraged the significant outsourcing of financial management as a tool to prevent the temptation for high- as well as low-ranking Vatican officials to throw themselves into daring financial operations whose outcome has at times cast a shadow on the whole institution in the past.
IOR is thus changing: its structure is becoming increasingly leaner, high-level tasks are being outsourced and a new administrative and monitoring structure is being created.
The consulting firm Promontory is already operating in the Vatican bank and is slated to be given increasingly more room as its screening of the bank has led to the shutdown of "1,600" accounts of holders who did not fit into any of the categories of clients the bank is legally allowed to have, as explained by the pontiff himself.
A fully operational and managerial role in Pope Francis' IOR is also played by Monsignor Battista Ricca, who was appointed to an office at the bank by the pontiff.
Newly appointed secretary of state, Cardinal Pietro Parolin, moreover plays an increasingly important role in many sectors starting with the Vatican bank.
Pope Francis strongly wants a transparent and crystal clear IOR.
After all, the pope's determination can also be deduced from the fact that he has not hesitated in reviewing the positions of IOR account holders, in particular those of clergymen, starting with his own chamberlains, ANSA has learned.
When the sums could not be clearly justified, the pope allegedly encouraged their donation.
http://popefrancisnewsapp.com/