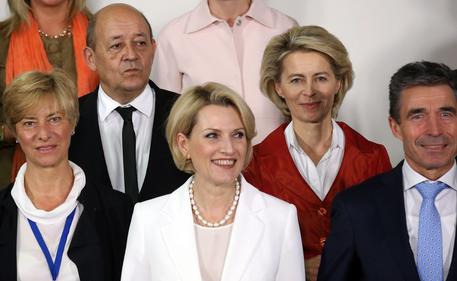 (ANSA) - Rome, June 3 - The Italian government is hoping for success in talks with India's new government in the case of two marines held in India for more than two years in the killing of two fishermen, Defence Minister Roberta Pinotti said Tuesday.
Pinotti, speaking on the sidelines of a conference of NATO defence ministers, said that if talks do not succeed, international arbitration may be the only solution.
One day earlier, the two marines Massimiliano Latorre and Salvatore Girone sent a Republic Day video message back to Italy from New Delhi.
Latorre said that all they can do is "suffer with dignity" as they wait for a resolution to the case against them involving their actions while on an anti-piracy patrol. In response Nicola Latorre, who heads the Senate defence committee, said talks should soon begin with India's newly elected centre-right government of Narendra Modi.
That could be possible, said Pinotti.
"(Otherwise) we will continue on the road of arbitration," she said.
Pinotti also quipped that because she is from Naples, she is by nature "a bit superstitious" and therefore would not make predictions about the outcome of the marines case.
Last month the Italian government announced it was opening a "new phase" in the saga, replacing its special envoy on the case and sending its ambassador back to New Delhi to help steer the case towards arbitration by an international organization such as the UN.