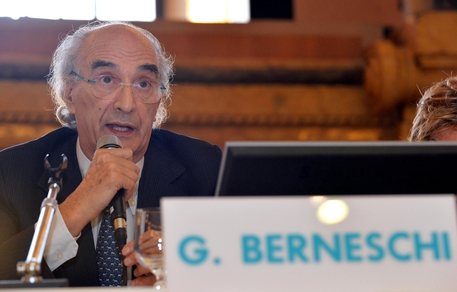 (ANSA) - Genoa, May 29 - The ex-president of mid-sized Italian bank Carige was moved to full custody after breaching conditions of his house arrest, authorities said Thursday.
Giovanni Berneschi, who is also vice-president of the Italian Banking Association (ABI), was put under house arrest one week earlier on suspicion of involvement in a massive fraud scam at Italian bank Carige.
But his house arrest was revoked after he contravened conditions that he was not to have contacts outside his home and family, authorities said.
Prosecutors were reportedly concerned that that could lead to a possible tampering with evidence. Berneschi, who was Carige's president until last year, was arrested along with the former chief executive officer of the Carige Vita Nuova subsidiary, Fernando Menconi, and real-estate businessman Ernesto Cavallini.
Police said they believe Berneschi, 77, was the ringleader of a scam involving purchases made at inflated prices of stakes in companies headed by accomplices, which allegedly made it possible for 21 million euros to be taken out of Italy into Switzerland between 2006 and 2009.
They suspect that part of this money was used to buy properties in Switzerland in the name of senior figures at Carige, a mid-sized lender based in Genoa with about 1,000 branches and two million clients.