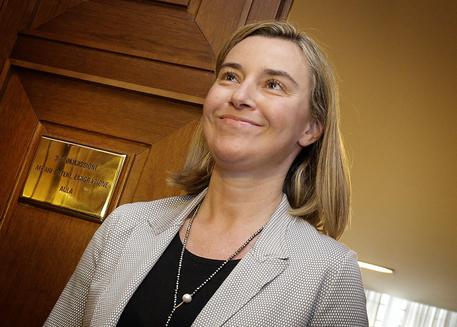 (ANSA) - Rome, May 27 - A team of experts in international law have begun work on the case of two Italian marines detained in India for over two years pending trial after allegedly murdering two Indian fishermen during an international anti-piracy mission, Italian Foreign Minister Federica Mogherini said Tuesday.
The group led by barrister Daniel Bethlehem, a former legal advider to the British Foreign and Commonwealth Office, has been tasked with "following the new phase of internationalisation" of the case involving Massimiliano Latorre and Salvatore Girone, who have been held in New Delhi under mobility restrictions after allegedly shooting dead fishermen Valentine (aka Gelastine) and Ajesh Binki aboard their trawler during an anti-piracy mission in February 2012.
Last month the Italian government announced it was opening a "new phase" in the saga, replacing its special envoy on the case and sending its ambassador back to New Delhi to help steer the case towards arbitration by an international organisation such as the UN.
"The inauguration of the new government (in India) does not mean that we will change our position regarding the fact that India does not have jurisdiction in the case," added Mogherini, insisting that the two naval fusiliers were "covered by international immunity" at the time of the shooting.