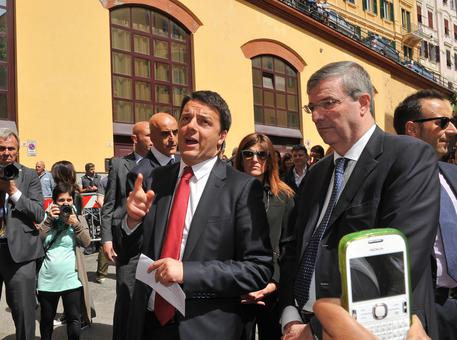 (ANSA) - Rome, May 26 - Premier Matteo Renzi vowed to continue his reform drive in Italy and work to change the EU after his centre-left Democratic Party's (PD) historic win in Sunday's European elections. The election was expected to be a close battle between the PD and the anti-establishment, Euroskeptic 5-Star Movement of comedian-cum-politician Beppe Grillo.
Instead the PD claimed its biggest-ever election victory, winning 40.8% of the vote, almost twice as much as M5S's 21.2%, while Silvio Berlusconi's opposition centre-right Forza Italia (FI) party came third with a disappointing 16.8%. "Now Italy has all the conditions necessary to be able to change and to invite the European Union to change," Renzi told a press conference.
Renzi wants to use Italy's six-month presidency of the EU, which starts in July, to take the union in a new direction so that it is no longer seen as the champion of austerity and pointless rules, but fights to boost growth and combat unemployment. But he also stressed that to change Europe, "we have to first to change ourselves". He added that the result meant there were no more "alibis" to stop progress with the ambitious programme of institutional and economic reforms he has embarked after unseating his party colleague Enrico Letta in February to become Italy's youngest premier at 39.
"In the derby match between hope and anger, hope won," Renzi said referring to the angry campaigning of Grillo, who wants to destroy the current political system and had predicted the M5S would win the European elections, triggering the end of Renzi's political career. The premier stressed, however, that he did not consider the result to have endowed him a popular mandate he had previously, given that he is Italy's third consecutive premier to come to power though backroom maneuvering rather than as a direct result of elections. "It wasn't a referendum on me or the government," he said. "It's a vote that expresses extraordinary hope. I don't consider the result to be a personal legitimization". He also dismissed speculation he could be tempted to call early national elections to try to ride the wave of the European vote, saying his executive would run until the end of the current parliamentary term in 2018.
"The executive will last until 2018 because the Italian people want to see results, not vote again," he said.