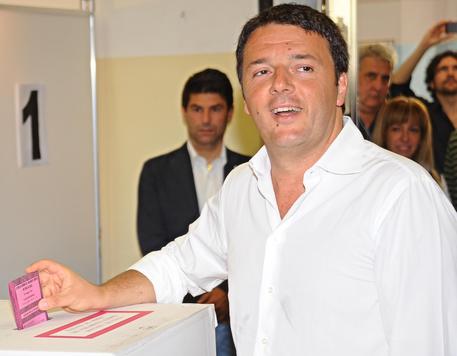 (ANSA) - Rome, May 26 - Premier Matteo Renzi's centre-left Democratic Party (PD) was on course for a massive victory in Sunday's European elections, with projections making them Italy's top party with around 41% of the vote. "It's a historic result," Renzi said via his Twitter account, @matteorenzi. "I'm moved and determined (and) now (I'll go to) work for an Italy that changes Europe". Comedian-turned-politician Beppe Grillo's anti-establishment, Eurosceptic 5-Star Movement (M5S) was projected to land about 22% and ex-premier Silvio Berlusconi's opposition centre-right Forza Italia (FI) was on course to capture only 16% of the vote.
The PD hailed the outcome as an endorsement of the ambitious programme of institutional and economic reforms Renzi has embarked on since unseating his party colleague Enrico Letta in February to become Italy's youngest premier at 39.
"If the projections are confirmed, it's an historic result that rewards the government's reform drive," Reforms Minister Maria Elena Boschi said. Renzi's reforms include a drive to change the Constitution and transform the Senate into a leaner assembly of local-government representatives with limited lawmaking powers as part of an overhaul of the country's slow, costly political machinery.
He has also introduced a tax bonus worth 80 euros per month for low earners and the unemployed in a bid to boost Italy's weak growth after its longest postwar recession.
Hailed by some as the biggest centre-left victory since World War II, Sunday's outcome has also given a popular mandate to the Renzi, who was Italy's third consecutive premier to come to power though backroom maneuvering rather than as a direct result of elections. The M5S, which captured a stunning 25% of the vote it in last year's inconclusive general election, looked in store for a defeat of sorts.
Grillo had forecast that the movement, whose stated aim is to destroy the current party system, would come first and cause Renzi to suffer a political "lupara bianca" - a term used to refer to a mafia hit that leaves no trace of evidence.
Grillo had also threatened to lead hordes of M5S supporters in Rome next week to demand new national elections and the resignation of President Giorgio Napolitano, who he says is not a fair arbiter of Italian politics, if his movement came first.
Some commentators suggested that FI's poor showing, meanwhile, could finally mark the end for Berlusconi, Italy's dominant political figure for two decades. Berlusconi was unable to stand or even vote in the election after being ejected from parliament following a definitive tax-fraud conviction last year.
The three-time premier and his supporters say that conviction is the result of a persecution by leftwing elements in the judiciary who are trying to eliminate him from Italy's public life.
"Forza Italia is paying a big price for a decision by the judiciary that I consider seriously unfair and denied Italian moderates of a figure they look to," said Giovanni Toti, a senior FI official and former executive at Berlusconi's media empire. Projections said the Eurosceptic, anti-immigrant Northern League would get around 6% of the vote.
Interior Minister Angelino Alfano's New Centre Right and its allies in the centrist UCD - both of which support Renzi's executive - were set to collect around 4.3%, just over the 4% entry threshold.
The leftist Tsipras group, which is deeply critical of EU policy, was also projected to just make the 4% bar.
A projection by the SWG institute for SKY predicted that the PD would have 31 seats in the new European Parliament, which could take it above Germany's SPD and make it the biggest party in the Socialist bloc.
It forecast that M5S would have 17 MEPs, FI 13, the Northern League five, and NCD-UCD and Tsipras would get three each.