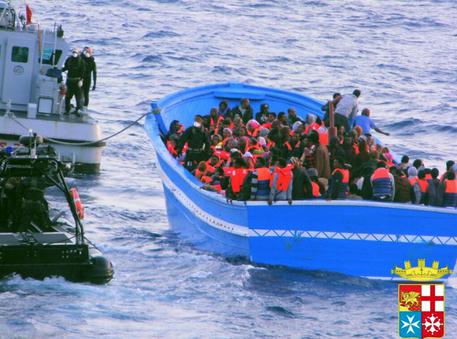 (ANSA) - Rome, May 23 - Nine Egyptians presumed to be smugglers were arrested following the rescue of two migrant boats carrying more than 500 migrants off the coast of Sicily on Monday, May 19, authorities said Friday.
Police in Catania were alerted by crew from rescue frigate Grecale and patrol vessel Foscari, and coordination with Siracusa's public prosecutor and Catania's Anti-Mafia district attorney was immediately organized. Upon arrival in the port of Augusta near Siracusa on Thursday morning, the nine persons were arrested and taken into custody.
Monday's operation rescued more than 500 migrants, including 133 children, from two wooden boats near Sicily's Capo Passero.
Since the start of Mare Nostrum, on October 13, 2013, authorities say 44,073 migrants have been rescued and more than 200 smugglers have been arrested.