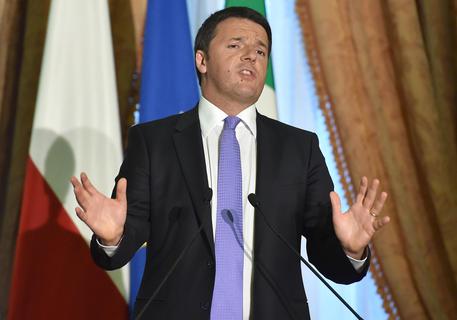 (ANSA) - Rome, May 20 - Italian Premier Matteo Renzi on Tuesday called on the United Nations to set up refugee camps in conflict-hit Libya. "Should the UN's refugee agency set up refugee camps on the Libyan coasts or not? I think it should," Renzi said.
"The absence of international community and of the UN in Libya risks opening the door to...fundamentalists who weren't there before".
On Monday the Italian embassy on Monday advised Italians in Libya to consider temporarily coming home following recent political violence in the capital Tripoli. On Sunday renegade anti-Islamist troops stormed the interim parliament and suspended the Islamist-dominated House, accusing it of empowering extremists. At least two people were reported killed and 66 hurt in ensuing violence, some of the worst since the 2011 uprising that ousted strongman Muammar Gaddafi in 2011.
The turmoil that has followed Gaddafi's death has been a big factor in the escalating migrant crisis Italy is enduring, as human traffickers are capitalising on the lack of a strong central government in Tripoli. Last week he EU's border agency Frontex said arrivals in Italy, the first port of call for many migrants trying to enter Europe from North Africa, in the first four months of 2014 rose by a dizzying 823% over the same period in 2013.
From January to April 2014, 25,650 migrants arrived in Sicily and 660 in the Puglia and Calabria regions, it said.
Renzi has accused the European Union of looking the other way as Italy struggles to cope with the crisis.
On Tuesday he said he would continue to press for more international assistance.
"The way in which Europe is dealing with Libya is clear for everyone to see," said Renzi.
"Special envoys will be sent from the individual countries and we'll do that too. But what is Europe's intention? "I intend to bring the issue up at next Tuesday's European summit and at the G7 meeting of June 4 and 5, as I did with the UN Secretary General (Ban Ki-moon)".