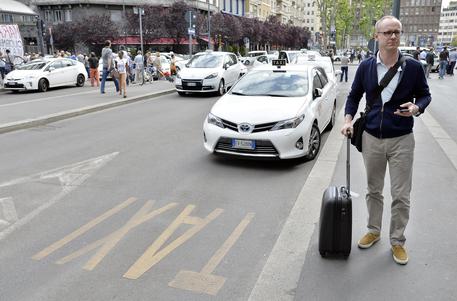 (ANSA) - Milan, May 20 - Taxi drivers in Milan on Tuesday continued their protest for the fourth consecutive day over the introduction the Uber app, a service allowing passengers to connect with nearby drivers at the push of a button on their smartphone. At Milan central station drivers refused to take fares with the exception of the elderly and people bound for hospital in opposition to the new Uber service, which they say is in violation of laws setting out the roles and characteristics of taxi drivers and chauffeur car rentals.
Based in California, Uber allows users to to see where the closest participating car is and book it after agreeing a set fare paid by credit card.
In other parts of the city drivers remained divided in their response, with some continuing to work as usual and others abstaining in protest against what they described as "unfair competition".
"We don't have any other way to protest against something that is illegal. Illegal, you understand?" a taxi driver told ANSA.
"Do you know that the drivers who register with the new service can be private individuals with their own car? What if they have a criminal record? What if their car insurance is not up to date? If they haven't had their vehicle checked?" he continued.
"The thing that makes us angriest is that none of the people who demand rules and checks of us has supported us".