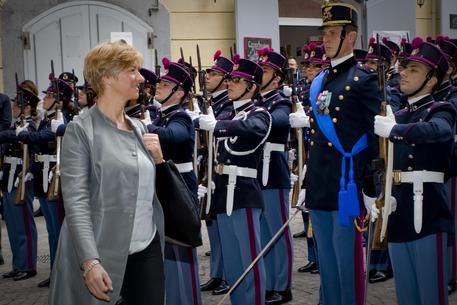 (ANSA) - Catania, May 20 - Italian Defence Minister Roberta Pinotti on Tuesday confirmed the intention of holding dialogue with India's new government over two Italian marines detained in the country for alleged murder, but said Italy would seek international arbitration in the event of further delays. Massimiliano Latorre and Salvatore Girone have been held in India under mobility restrictions for over two years pending trial after allegedly shooting dead fishermen Valentine (aka Gelastine) and Ajesh Binki aboard their trawler during an anti-piracy mission in February 2012. "Because of their functional role our two naval fusiliers must not be tried in India because they are soldiers who were on an anti-piracy mission on Italy's behalf," reiterated Pinotti.
Last month the Italian government announced it was opening a "new phase" in the saga, replacing its special envoy on the case and sending its ambassador back to New Delhi to help steer the case towards arbitration by an international organisation such as the UN.
"This government has internationalised the affair by asking for international arbitration," Pinotti continued.
"We are in talks with the Indian government, which is new and we shall see what position it takes," said the defence minister in relation to the new centre-right government led by Narendra Modi which emerged victorious from India's marathon general elections in mid-May. "Thereafter, however, we will not accept any further delays: our marines have been awaiting charges for two years," said Pinotti.
"After these talks we will proceed with arbitration".