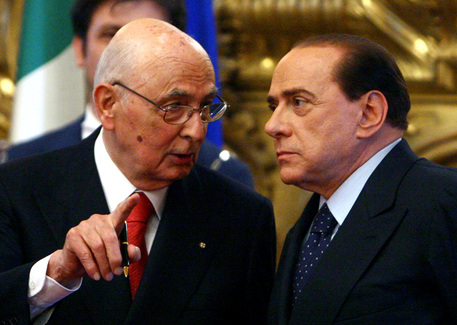 (ANSA) - Rome, May 14 - President Giorgio Napolitano said in a statement Wednesday that he did not participate in any of the international meetings in which European officials allegedly plotted to bring down Silvio Berlusconi's government in 2011.
Rumours that the third Berlusconi's government was scuppered by a conspiracy were fueled this week by a new book by former US Treasury secretary Timothy Geithner. The former Treasury secretary wrote that in 2011, at a G-20 meeting, Europeans were pushing the White House to get involved in pressuring Berlusconi out of office, as Italy risked a Greek-style financial meltdown with the spread between Italian 10-year bonds and their German counterpart ballooning to over 500 points and yields above 7%.
Napolitano was instrumental in engineering the emergency technocrat administration led by ex-premier Mario Monti that replaced Berlusconi's administration in November 2011.
But the head of State said Wednesday that he did not have the right to participate in any of the reported meetings at which there was alleged talk of toppling Berlusconi. The conspiracy theories were also boosted by another book earlier this year that revealed Napolitano contacted Monti some time before the Berlusconi government collapsed.
In Wednesday's statement, Napolitano said that any alleged "pressure or coercion" that Berlusconi was subject to when he quit was "never brought to the attention" of the Head of State.
"The resignation freely and responsibly delivered by premier Berlusconi on November 12, 2011, having previously been announced on November 8, was not explained, except in regards to political-parliamentary events, in both cases," the statement said.
Berlusconi, meanwhile, said Geithner's book reinforced his assertion Wednesday that Italy has endured a series of "coups", including the end of his third government in 2011. "We've been fighting for freedom for 20 years and faced four coups," the 77-year-old media magnate told a meeting of his opposition centre-right Forza Italia (FI), which is calling for a parliamentary inquiry into Geithner's revelations. Other "coups" that Berlusconi says Italy has endured include the collapse of his first, short-lived government in 1994 after a criminal probe and his ejection from parliament last year following a definitive tax-fraud conviction. On Wednesday Berlusconi also reiterated his assertion that the tax-fraud conviction is part of a two-decade campaign by left-wing elements in the judiciary to wipe him from the political arena.