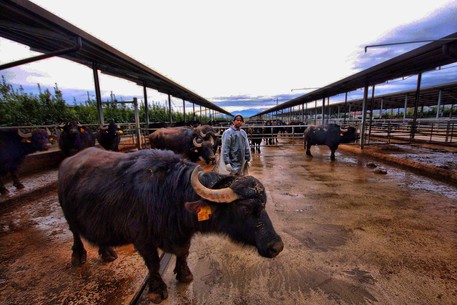 (ANSA) - Caserta, May 12 - Police in Campania on Monday arrested 13 people and seized a company for allegedly making unsafe doctored mozzarella di bufala, the southern region's prized gourmet cheese. Police also impounded six stores belonging to cheesemaker Cantile di Sparanise, which police accuse of diluting top-quality water-buffalo milk with imported cow milk in the production of the soft cheese. Health officials said in addition to duping customers, the adulterated product posed health risks, containing 2,000 times the recommended bacteria limit. Investigators said two health inspectors were in cahoots with managers at the cheesemaker, alerting them when outside inspectors from bodies such as the European Union were planning an inspection. Authorities discovered the adulterated product after a worker at the factory lost his fingers on one of the machines, which police said had a safety feature removed to enable faster production.
"Scandals like this create enormous damage for our country and the Italian brand," said a statement from consumer group Codacons. Farmers' association Coldiretti said the case tarnishes the image and ultimately harms the 1,500 water-buffalo dairy farms in the region around Naples. Used to top pizzas and make caprese salads, mozzarella di buffala is a 435-million-euro business in Campania, with 71 million euros coming from exports, added Coldiretti. The consortium that protects authentic makers of mozzarella di buffala in the region announced after the arrests that the company's membership had been revoked two years ago.
However the company continued to use the consortium's seal of approval pending a decision from the agriculture ministry.