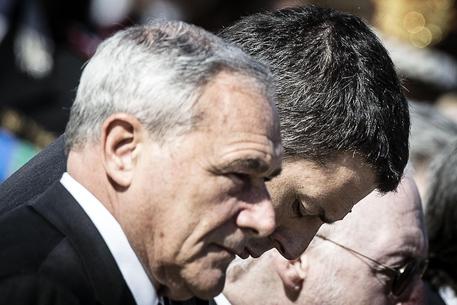 (ANSA) - Rome, May 9 - Debate raged Friday between Senate Speaker Pietro Grasso and Premier Matteo Renzi over whether the cost of tax reductions, including a 10-billion-euro income-tax cut, has actually be properly accounted for in the national budget.
Grasso said that a study by Senate's economic research office, which he defended as independent, has raised questions about the tax plan contained in a decree which Renzi recently pushed through parliament.
Renzi retorted that the decree has been properly "covered" by cash freed from changes to spending, millions of euros recovered from tracking down tax evaders, a new levy on commercial banks, and sale of some State assets.
The Senate concerns were "technically false" and based on flawed information, added Renzi. In response, Grasso said that he was "guarantor of the autonomy and independence" of the Senate research office and its assessment of the affordability of the tax decree.
The Senate "is an institution that deserves respect," added Grasso.
Renzi was going too far by showing disrespect for the Senate and its budget review process, said Renato Brunetta, House whip for the opposition Forza Italia (FI).
He added the Renzi appeared to be "on the verge of a nervous breakdown, he does not know what he says, he insults (and) provokes".
Defence of the Senate research office also came from junior economy minister Stefano Fassina, a member of Renzi's own Democratic Party (PD).
"The Senate Budget service, like the corresponding service of the House, is an institution of excellence, with a high level of professionalism and independence," said Fassina. "This is serious, the continuous attacks of the premier on an institution crucial to the independence of Parliament," Fassina added. Renzi's budget decree included a 10-billion euro annual income-tax cut for lower-income earners, worth an average savings of about 80 euros per person per month, and will begin part-way through this year so the total price tag for 2014 will be about seven billion euros.
The cabinet decree also confirmed a 10% reduction to the Irap regional business tax and released an eight-billion euro payment on the 68 billion euros in outstanding government debts to businesses.
On the revenue side of the ledger to cover the tax cuts, Renzi announced that shifts and reductions in government spending will total 6.9 billion euros for 2014, rising 14 billion euros next year, through such measures as reducing government office space, increasing efficiency at the local, regional, and national level, plus a deep reduction in the number of government cars in use.
As well, about 400 million euros will be saved from trimming the defence ministry, including 150 million euros from a review of the F-35 fighter-jet program, Renzi has said.
Other sources will include a new levy on private-sector banks that are parking money inside the central bank, worth an estimated 1.4 billion euros, as well as savings found for this year in a major spending-review exercise led by Commissioner Carlo Cottarelli.