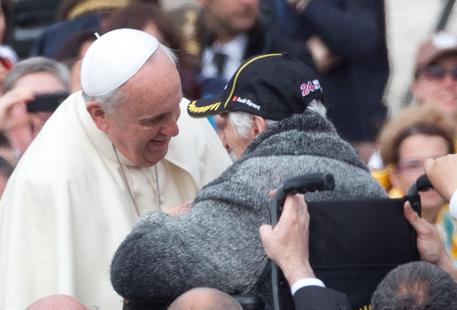 (ANSA) - Rome, May 9 - An organization of survivors of child sexual abuse at the hands of Catholic priests has sent Pope Francis a videotaped appeal for justice and compensation, La Repubblica newspaper reported Friday.
The organization called Rete l'Abuso (Abuse Network) made the video featuring dozens of adult survivors of child sexual abuse in religious institutions. Among them are eight deaf-mute people who were enrolled at the Antonio Provolo religious institute for disabled children in the northern city of Verona, where some 25 priests abused at least 100 victims from the mid-1950s to the mid-1990s. In a 2011 letter, an association of adult survivors of the abuse at Provolo wrote to then-pope Benedict XVI, asking him to deconsecrate three churches they said they were sexually assaulted in as children.
In their video message, the victims call on Francis for compensation, because the crimes committed against them have long since timed out under Italian law.
In a Wednesday hearing in Geneva, Vatican UN Ambassador Silvano Tomasi told the UN Committee on the Convention against Torture that since 1950, the Holy See has paid sex-abuse victims a total of $2.5 billion in damages and $78 million to pay for therapy. The Abuse Network in February called on the Vatican to declassify its archives on pedophile priests so they can be turned over to public prosecutors.
On its website, it has published a list of 148 convicted child-molesting priests, as well as a map of Italy detailing all the parishes where child abuse allegations have surfaced.
"We believe the list to be useful to all parents who want to protect their children from these priests, but there is still a lot of work to do", Network organizers said. "We're still here, and we're asking the pope to hear our call".
Pope Francis in April issued his strongest apology yet for the sexual abuse of minors by Catholic priests.
"I feel compelled to personally take on all the evil wrought by some priests... and to personally ask for forgiveness for the damage they have done for having sexually abused children," said the pontiff.
Francis promised members of the International Catholic Child Bureau (BICE) that there would be no "step backwards" in punishing sex-abuse culprits and fighting such abuse, one of his priorities amid a sweeping reform drive.