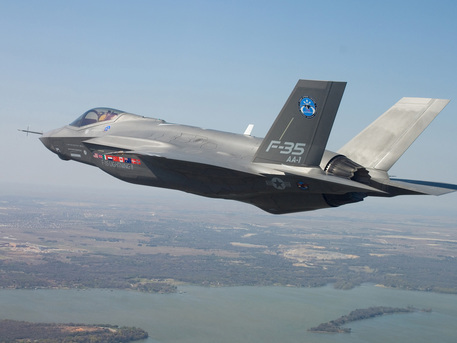 (ANSA) - Rome, May 7 - The Lower House defence committee on Wednesday okayed a controversial 50% cut to the government's budget for the F-35 fighter jet. Allies including the United States have urged Italy to maintain its plans to buy 90 of the aircraft which according to some estimates costs $200 million each. Later, aerospace manufacturer Lockheed Martin said in a statement that it estimates the cost of the aircraft at about $108 million each, engine included.
The decision was split, as members of ex-premier Silvio Berlusconi's Forza Italia (FI) party voted against the cuts, members of Premier Matteo Renzi's Democratic Party (PD) voted in favour, and some committee members abstained. The committee has been reviewing the overall defence budget, as Renzi's government looks for ways to reallocate its spending from lower-priority to higher-priority areas.
Earlier this week, John R. Phillips, the United States ambassador to Rome, said that because Italy has a strategic role in regional defence, it must go ahead with its F-35 fighter-jet purchase plan In March, the Italian government froze spending on the fighter-jet program and said that as a cost-cutting measure, it was considering reducing the number of F-35s it will purchase.
The aircraft are among the costliest jet fighters in the world and are developed jointly by a number of allied nations including Italy. If the government decides to cut the F-35 program, it would mark the second time Italy has reduced the number of these Lockheed Martin fighter jets, a budget item which is currently worth about 11.8 billion euros over 45 years beginning in 2015.
Italy in 2012 announced plans to cut its order to 90 from the 131 jets originally agreed to in 2002, saving the country some five billion euros.