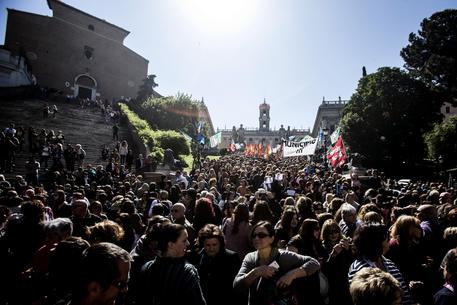 (ANSA) - Rome, May 6 - Rome city employees protested Tuesday over alleged plans by mayor Ignazio Marino to slash their auxiliary pay. Thousands of nursery school teachers, municipal police officers, administrative staff and other employees gathered in Piazza del Campidoglio, the seat of city government, to voice their anger over the possible cuts announced in light of a finance ministry report describing auxiliary wages as 'illegitimate'. "It is not possible to cut salaries of 1,200 euros as this would mean putting our survival in question," protesters said. "Auxiliary wages? We are not paid irrespective of merit but for services provided to this city," they continued.
However, Marino of the centre-left Democratic Party (PD) defended his position, saying he had raised the issue at the national level but that he could only act within the law.
"If the response (from the government) is positive I will be very happy to include auxiliary wages in the May pay packet according to law," continued the mayor.
"But no one, not even the trade unions, can ask me to go against the law of the State".
On Tuesday Italy's three main trade union confederations, CGIL, CISL and UIL, sent Marino an injunction inviting him to refrain from "enacting the threatened unilateral initiatives and all other actions aimed at unscrupulously affecting the legal treatment and remuneration of workers".