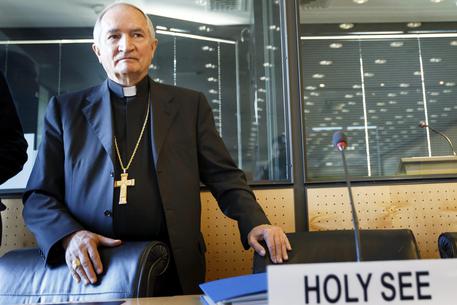 (ANSA) - Geneva, May 5 - The Holy See has jurisdiction over the small territory of the Vatican City state only, and not over Catholic priests around the world, including those accused of abuse, a senior Church official told a United Nations committee on Monday.
Archbishop Silvano Tomasi, papal envoy to the United Nations in Geneva, told a UN Committee against Torture "that the Holy See has no jurisdiction...over every member of the Catholic Church".
"The Holy See wishes to reiterate that the persons who live in a particular country are under the jurisdiction of the legitimate authorities of that country and are thus subject to the domestic law and the consequences," he said. However, victims' groups have argued that sexual abuse of children falls under the terms of the UN Convention against Torture, which the Vatican acceded to in June 2002.
This is the second time this year that the Vatican has been called before the UN to explain its record in dealing with decades of abuse of children by priests.
Victims of sexual abuse have argued that the Church itself has failed to protect children and has even shielded accused priests in order to protect the Church's reputation.
Monday's report by the Holy See to the UN marks its first under the convention on torture and in a statement earlier in the day, Vatican spokesman Father Federico Lombardi said that the Holy See has shown "strong commitment against any form of torture and other cruel, inhumane or degrading treatment or punishment". Lombardi also said the UN committee must not give in to pressure "exercised over the committees and public opinion by (non-governmental organizations) NGOs with a strong ideological character and orientation," that he said will aim to impose their agenda on this week's proceedings.
Such groups, said Lombardi, will try to "bring the issue of the sexual abuse of minors into the discussion on torture, a matter which relates instead to the convention on the rights of the child". The Vatican is expected to respond on Tuesday to questions and issues raised during Monday's session.
The Vatican has, for too long, sheltered priests to protect itself, complained an organization of victims, the Survivors Network of those Abused by Priests (SNAP).
"Throughout the world, children and vulnerable adults have been and continue to be subjected to widespread and systemic rape and sexual violence by priests and others associated with the Roman Catholic Church," SNAP said in a statement Monday. In February, a UN human rights committee denounced the Vatican for adopting policies that it said allowed sexual abuse of tens of thousands of children by clergymen.
The UN Committee on the Rights of the Child demanded immediate action and urged the Vatican to hand over its archives on sexual abuse so that culprits and "those who concealed their crimes" could face justice.
In a wide-ranging report, it also called on the Holy See to "immediately remove" all clergy who are known or suspected child abusers and turn them over to civil authorities, adding that it was "gravely concerned" that the Holy See had not acknowledged the extent of the crimes committed.
Nor has the Church taken measures to protect children and deal with sexual abuse, it added.
In response, the Holy See's Secretary of State Pietro Parolin pledged to consider the report carefully while a Vatican spokesman said that a plan to improve Church transparency in how it deals with cases of child sex abuse was in the works.
Since his election in March 2013, Pope Francis has said that dealing with sex abuse in the Church was crucial to maintaining its credibility.