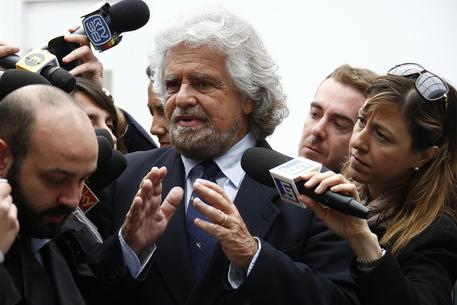 (ANSA) - Rome, May 5 - Italian Premier Matteo Renzi on Monday compared anti-establishment political rival Beppe Grillo to a "jackal" pitting unions against workers at a failing steel factory in an address the comedian-turned-politician made late last month.
Italian political leaders are engaged in a fierce campaign for European Parliament elections May 25. Renzi, who is also head of the centre-left Democratic Party (PD), rallied party cadres in Rome saying they must distinguish themselves from the head of the 5-Star Movement (M5S) by offering solutions and hope to Italians rather than fatalism, like Grillo, who Renzi characterized as an opportunistic carnivore. "We must be the ones we want to give hope to Italy while all around, no matter what is happening, there are those who throw themselves with a cat-like instinct to say there is nothing left to believe in, the state no longer exists. In Piombino, Grillo went to act as a jackal, but one does not put workers against unions in a factory in crisis," said Premier Matteo Renzi, making reference to an April 26 address Grillo made at the Lucchini steelworks, which is shutting down, on the Tuscan coast south of Livorno.
On that occasion, Grillo slammed the government and unions for allegedly doing nothing to save the factory. The anti-euro populist figure accused unions of betraying workers, and urged them to boycott union elections.
Renzi said, "It is well known that I am not partial toward unions, but the last place to go and be a jackal is where a company like Lucchini is closing. We have proposed a solution.
This is the difference between those who bet against and those who bet in favour of Italy".