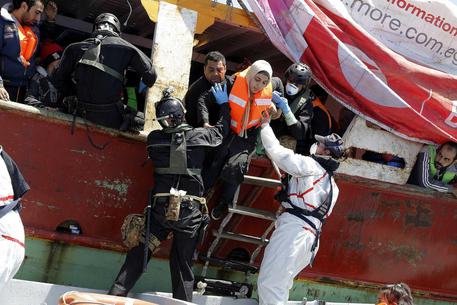 (ANSA) - Rome, May 5 - Italian Premier Matteo Renzi on Monday again upped calls for Europe to come to Italy's side in managing the influx of migrants from across the Mediterranean. Speaking to leaders of his center-left Democratic Party (PD), Renzi said the PD was "defending Mare Nostrum", Italy's large-scale search-and-rescue patrol, in its campaign ahead of European Parliament elections May 25. "It's allowed us to avoid counting the dead at the bottom of the sea...and to arrest 207 traffickers," said Renzi. But Mare Nostrum, which translates to 'Our Sea' as the Romans called the Mediterranean, cannot remain entirely "ours", added the premier. "Enough. If Europe has a heart, it must understand that the you can't play with human dignity in the Mediterranean". The interior ministry projects that migrant landings will set a record number in 2014. Mare Nostrum was implemented after disasters off the coast of Sicily involving migrant ships left roughly 400 dead. Opponents of the program, namely the anti-immigrant Northern League, argue it is not worth the cost, and that those to benefit the most are human smugglers.