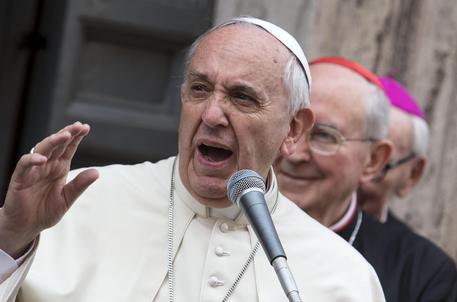 (ANSA) - Vatican City, May 5 - There is no place in the Catholic Church for careerists or "dirty" money grubbers, Pope Francis said Monday in his latest denunciation of people who use spiritual status for material benefit.
"Those who want to climb mountains should go somewhere else," the pope said at a Mass in the Vatican.
He slammed "those who follow Jesus for money, who try to make economic profit from their parishes, from the Christian community, from hospitals, from colleges".
Every period in Church history, Francis noted, has seen "real money grubbers who have made so much money.
"They presented themselves as benefactors but they took so much money and not always clean money," said the pontiff, who is trying to clean up Church finances. Francis has been warning about people trying to use the Church to satisfy their desire for power or money ever since he became pontiff in March last year after the shock resignation of Benedict XVI.
A year ago, on May 8, he stressed that careerism is harmful to the Church, especially when used as "a springboard for personal ambitions".
The pope invited a crowd in St Peter's, including 800 nuns from parishes around the world, to "think of the damage caused to the people of God, men and women of the Church, by careerists and climbers".
In his homily in St Martha's House Monday, Francis again warned that there are people in the Church that follow Jesus for vanity or thirst for power and wealth, and he prayed the Lord to give us the grace to follow him for love.
Francis took his cue from the Gospel reading of the day in which Jesus tells a group of people who were looking for him that they are doing so " not because you saw signs, but because you ate the loaves and were filled".
This episode, the Pope said, invites us to ask ourselves whether we are following the Lord for personal gain or because we love Him, because, he said, we are all sinners, and we need to make an effort and look into ourselves in the way we live our Faith.
Jesus - Pope Francis pointed out - mentions three attitudes that we must avoid when we follow God or search for Him. The first - he said - is vanity. In particular he refers to those who are in public positions who give alms or fast because they want to be seen doing so: "This is not the right attitude. Vanity is not good, vanity causes us to slip on our pride and everything ends there. So I ask myself the question: and me? How do I follow Jesus? When I do good, do I do it under the public eye, or do I do it in private?" And the Pope said, "I also think of pastors, because a pastor who is vain does not do good to the people of God: even if he is a priest or a bishop, he does not follow Jesus if he is besotted by vanity".
And the other attitude Jesus warns against - the Pope continued - is thirst for power: "Some of those who follow Jesus do so in search of power.
Perhaps they do not do so with full consciousness. A clear example of this is to be found in John and James, the sons of Zebedee who asked Jesus to seat them in places of honour, one on His right and one on His left in his Kingdom. And in the Church there are climbers, people driven by ambition! There are many of them! But if you like climbing go to the mountains and climb them: it is healthier! Do not come to Church to climb! And Jesus scolds people with this kind of ambitious attitude in the Church".
Pope Francis noted that only when the Holy Spirit came, did the disciples change. But, he warned, sin remains in our Christian lives and we must continue to ask ourselves the question: "in what way do I follow Christ? Only for Him, even to the Cross, or do I do it for power? Do I use the Church, the Christian community, the parish, the diocese to gain some power?" The third thing that takes us away from the righteousness of our intentions - Pope Francis said - is money: "Those who follow Jesus for money, trying to take economic advantage of the parish, of the diocese, of their Christian community, of the hospital, or the college… Let us think of the first Christian community that was swayed by this intention: Simon, Ananias and Sapphira… this has been a temptation right from the beginning. And since, we have heard of so many good Catholics, good Christians, friends and benefactors of the Church that - it has been revealed - acted for personal profit.
They presented themselves as benefactors of the Church and made money on the side..." Pope Francis concluded asking the Lord for the grace to follow Jesus with the right intentions: without vanity, without desire for power, without lusting for wealth.
http://popefrancisnewsapp.com/