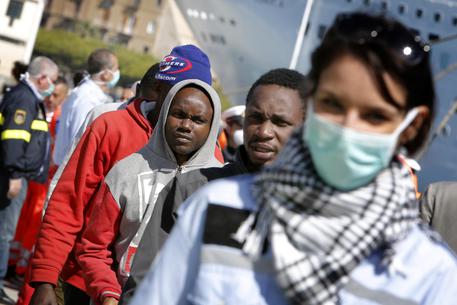 (ANSA) - Palermo, May 2 - Almost 1,200 asylum seekers landed in Sicily Friday, bringing to almost 2,000 the latest in a wave of new arrivals swollen by good weather and a sweeping new rescue operation launched after 400 migrants drowned in tow disasters last year.
An Italian Navy ship, part of the major Mare Nostrum search-and-rescue ops, reached the port of Augusta where the 1,170 migrants will disembark and be processed.
The migrants, from various North African countries, were picked up Thursday close to the stepping-stone island of Lampedusa.
Mare Nostrum is credited with saving almost all lives of the recent migrants who brave the perilous crossing towards a better life in Europe.
But Italy says it will be overwhelmed by almost one million desperate people massing on the North African shores, and has made the umpteenth appeal to the EU for help in coping with the emergency.
Separately Thursday, more than 300 North African asylum seekers were rescued south of Sicily and taken to the port of Messina.
Earlier Friday the Navy rescued 358 migrants in the Sicilian Channel between Italy and Africa.
The migrants, who are bidding for refugee status, included 43 women, one of them pregnant, and 24 children.
The asylum seekers said they came from Mali, Ghana, Belize, Niger, Sudan, Syria and the Palestinian Territories.
Earlier this week Italy said "at least 800,000" migrants are about to leave the North African coast for Europe, while the reception system in Italy - the first landing point for the vast majority of these - is already on the brink of collapse from tens of thousands of earlier arrivals.
"We no longer have a place to take them, and locals are overwhelmed by the constant arrival of foreigners," Giovanni Pinto, head of the Immigration and Border Police agency, told a joint meeting of the foreign and defence committees in the Italian Senate.
As many as 25,000 migrants have landed on Italian shores to date this year, almost a ten-fold increase over the 2,500 reported during the same period in 2013 and nearing 2011's record levels of 62,000 migrants, Interior Minister Angelino Alfano said earlier this month.
That has stretched already-strained resources in Italy, which only emerged from its deepest recession since the Second World War late last year, to the breaking point, particularly as it comes after record-breaking levels of migration in 2013.
Italy is appealing for international help in the face of the waves of newcomers fleeing their homelands in numbers that tend to increase in spring and summer months as sea conditions improve.
"Europe should know that Italy is a welcoming country, but we cannot accommodate everyone," Alfano said.
He added that 200 human traffickers believed to be responsible for smuggling thousands across the sea to Italy in dangerous conditions have been arrested.
One day earlier, Premier Matteo Renzi vowed to request more assistance from the European Union and the United Nations on tackling undocumented immigration during a special meeting of his cabinet to consider emergency migrant issues.
Part of the problem, said Pinto, is that many migrants who land in Italy are fleeing failed governments in Libya, civil war in Syria, and hostilities in other parts of the Middle East and North Africa.
That means the Italian government has no corresponding authorities to turn to for help in returning the migrants.
"We aren't dealing with a government that can establish treaties," said Pinto, refering to the case of Libya in particular.
"We have no interlocutors...There's no prime minister...there are no ministers," he said.
He also praised the efforts of the Mare Nostrum program, which was set up to prevent deaths at sea following two migrant ship disasters in October 2013 in which 400 people died in sight of Lampedusa.
"Surely the operation Mare Nostrum has given excellent results," said Pinto.
In contrast, some opposition politicians complain that Mare Nostrum only encourages migrants to risk their lives and cross the Mediterranean, often in rickety, overcrowded boats.
There are also concerns that it encourages human smuggling as well.
Northern League Secretary Matteo Salvini said last week that Italy must suspend these operations because they are too expensive - about 300,000 euros daily, he said - and represent an "invasion" of Italian shores.
Salvini, whose party has taken strong stances against immigration, called last month on allies across Europe to join the League in fighting "mass immigration" in the lead-up to May's European Parliament elections.
In response to the rising levels of dangerous migration, the United Nations High Commissioner for Refugees (UNHCR) has said that Italy must have more financial help.
The UNHCR has said that the Mediterranean is one of the busiest seas in the world, and urged European Union members to work together on solutions to the migrant situation, which is expected to worsen.
Migrant arrivals to Italy dropped off to the tiniest trickle under a push-back to Libya policy, similar to Australia's efforts to stem boat people, which was introduced by a previous Silvio Berlusconi-led government and criticised by progressives and human rights groups. The controversial policy was scrapped with the advent of centre-left-led governments although some analysts have said similar programmes should be restarted to stop the people traffickers who are growing fat on the plight of desperate migrants who save for years in slave labour and sex work to pay their passage to what they hope will be a better future.