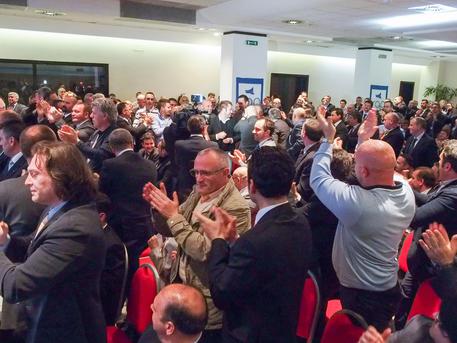 (ANSA) - Rimini, April 29 - Police union members gave a standing five-minute ovation to three fellow officers who were convicted of killing an 18-year-old man during a routine stop in Ferrara in 2005.
Judges in January 2013 upheld prison sentences of three years and six months for Paolo Forlani, Luca Pollastri and Enzo Pontani, who were convicted of involuntary manslaughter and use of excessive force in the beating death of Federico Aldrovandi during the night of September 25, 2005.
A fourth officer, Monica Segatto, was also convicted. All four served just a few months of their sentences in the slaying of the young man, whom they stopped while he was walking home from a club.
Police justified their use of force by saying Aldrovandi attacked them while in an "evident state of agitation".
They beat him into unconsciousness, and first-aid attempts to save his life failed.