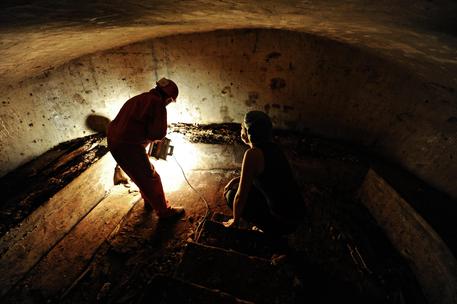 (ANSA) - Florence, April 29 - The remains of the woman who modelled for Leonardo Da Vinci's Mona Lisa may not be buried where a high-profile excavation is currently underway in Florence, but instead inside the nearby family tomb, the head of the dig said Tuesday. Silvano Vinceti, an art sleuth tasked by Italy's heritage committee to identify Lisa Gherardini Del Giocondo, launched a hunt three years ago for the tomb and possible remains in the sprawling three-story Sant'Orsola ex-convent. After successive digs and analysis comparing bone DNA to known relatives of the sitter, Vinceti now suspects she may be buried in the Santissima Annunziata basilica, where family members are interred. "We know from certified documentation that, buried in the chapel, we have the remains of her husband Francesco...and their son Piero," said Vinceti after the latest exhumations Tuesday. The art sleuth said its possible that the Mona Lisa sitter, who was not originally buried in the chapel, was moved there after Sant'Orsola was rebuilt in 1640, a century after her death. "It was the custom of the time," he said. Meanwhile, forensic experts on Tuesday took DNA samples from the remains of family members to determine whether she was in fact the sitter.
The tests on bones exhumed in 2012 aim to find out whether they date back to the same period as that of the model who sat for what would become the world's most famous painting, whose enigmatic half-smile thrills visitors to Paris's Louvre museum.
If scientists can find the remains of the sitter, they plan to digitally reconstruct what she looked like.