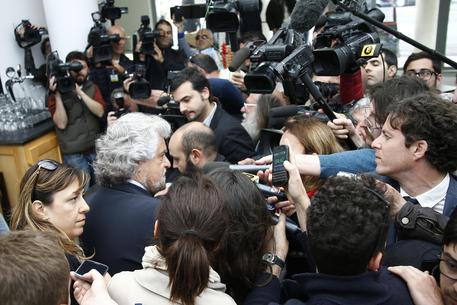 (ANSA) - Siena, April 29 - Firebrand politician Beppe Grillo, leader of the anti-establishment Five Star Movement (M5S), used a shareholders' meeting at Monte Paschi di Siena (MPS) on Tuesday to call for greater transparency at the troubled bank.
"We're causing a bit of chaos in order to create a little transparency," said Grillo before entering the meeting.
The ex-comedian went on to accuse the world's oldest functioning bank of 'mafia capitalism'.
"This is mafia capitalism, not Sicily," the M5S leader said.
"We are in the heart of the red plague and vote-buying," continued Grillo, himself a shareholder in MPS. Italy's third-largest bank by assets was thrown into crisis in January 2013 when it emerged that a shady series of derivative and structured-finance deals had produced losses of 720 million euros.
Since then, MPS has come under the spotlight on several occasions in relation to investigations for suspected insider trading and fraud.
At the same time, the bank is moving to repay part of a 4.1-billion euros aid package from the Italian government as part of a larger plan to turn itself around.
Analysts have said the bank may risk nationalization if it fails to generate enough capital to repay the state bailout.
However, Chief Executive Officer Fabrizio Viola recently denied this possibility.