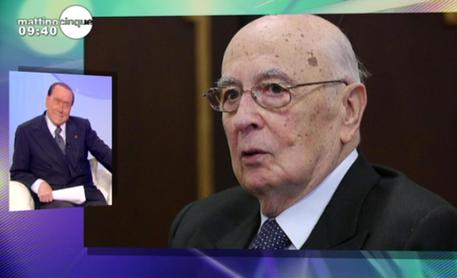 (By Denis Greenan).
(ANSA) - Rome, April 29 - Centre-right leader Silvio Berlusconi kept firing on all cylinders as he tried to make up ground in the European Parliament elections Tuesday, aiming a fresh barrage against Italian President Giorgio Napolitano for alleged bias in abetting a "coup" against the ex-premier.
Berlusconi quipped that he saw 'deep red' when he was presented with a photo of Napolitano, 87, on one of his TV channels Tuesday. The Forza Italia (FI) leader, 77, said he was reminded of the title of Dario Argento's cult slasher film Profondo Rosso because of the alleged leftist leanings of Napolitano, an ex-Communist, whom he again slammed for not giving him a pardon on an office ban for tax fraud. The president "had a moral duty to pardon me and his (lack of) impartiality will be judged by history", he said, reiterating claims the head of State had overstepped his role in helping the centre left against its old foe.
Berlusconi has frequently accused Napolitano, the titular head of the Italian judiciary, along with Italy's supreme court, of being part of a an alleged leftist plot to drive him from office - although he has stopped short of backing a drive by the anti-establishment 5-Star Movement (M5S) of comic-turned-political provocateur Beppe Grillo to have the president impeached.
In his latest pyrotechnical performance, Berlusconi also levelled his guns at Grillo, who has stolen much of his fellow populist's thunder in inveighing against the ill effects of career politicians and the euro, widening the gap between the M5S and FI to about eight points in most polls ahead of the May 25 EP vote, both well behind 39-year-old Premier Matteo Renzi's Democratic Party (PD).
Berlusconi compared Grillo, 65, to Adolf Hitler and said the Italian people should fear him.