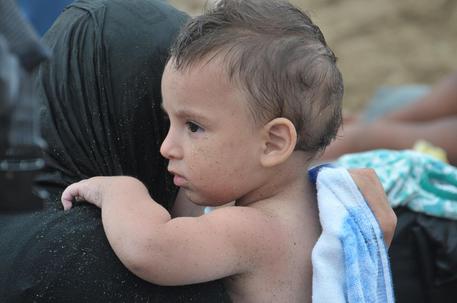 (ANSA) - Rome, April 29 - At least 800,000 migrants are about to depart the North African coast for Europe, with Italy's reception system already at the point of collapse, officials in Rome said Tuesday. "We no longer have a place to take them, and locals are overwhelmed by the constant arrival of foreigners," border police chief Giovanni Pinto told a joint meeting of the foreign and defence committees in the Senate.
Italy is appealing for international help. During a cabinet meeting on the Mare Nostrum sea patrol and rescue mission in the Mediterranean on Monday, Premier Matteo Renzi vowed to request more commitment from the European Union and the United Nations on tackling undocumented immigration.
Mare Nostrum was set up to prevent deaths at sea following two migrant ship disasters in October 2013 in which around 400 people died.
According to Interior Minister Angelino Alfano, more than 20,500 migrants have already landed on Italy's coasts to date this year - an enormous increase over the 2,500 reported during the same period in 2013. Speaking before a committee on the country's borders earlier this month, Alfano stressed that the number of incoming migrants was on pace "to reach the record levels of 2011, when more than 62,000 people entered". Thousands more have arrived since he spoke earlier this month, heightening the concerns about Italy's ability to cope.
Opponents of Mare Nostrum have argued the program only encourages migrants to risk their lives and cross the Mediterranean, often in rickety, overcrowded boats, which tends to increase in spring and summer months as sea conditions improve.
On Tuesday, Pinto told the Senate committees the situation was partly the result of the failed government in Libya, where most migrants from Africa head before setting sail for Europe. "We aren't dealing with a government that can establish treaties. We have no interlocutors...There's no prime minister...there are no ministers. There are two clans. One that's more moderate, the other that's extremist, backed by Qatar. We can offer them all the help they want, but it might be used in a negative way," the border police chief said. Meanwhile, Pinto said the interior ministry was drafting a plan that would accomodate 50,000 incoming migrants.