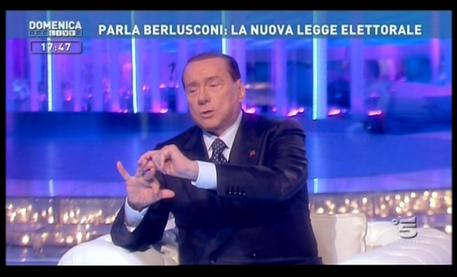 (See related) (ANSA) - Rome, April 28 - Former Italian premier Silvio Berlusconi on Monday said his claim that Germans of today deny the existence of Second World War concentration camps "was extrapolated out of context" by "the European left", and affirmed his "historic friendship with the Jewish people and the State of Israel". Berlusconi, who has long been known for verbal gaffs, added that he was made a victim of political opponents who set up a "campaign trap" to ensnare him ahead of European parliamentary elections on May 25.
Controversy erupted when, over the weekend, the media magnate and centre-right leader said that "for the Germans, the concentration camps never existed," in a fresh attack on an old foe, Martin Schulz, a German politician and speaker of the European Parliament.
He is also the leader of the Progressive Alliance of Socialists and Democrats in the European Parliament and their candidate.
The 77-year-old Berlusconi, who has been smarting after an Italian court upheld his ban on standing for election to the European parliament next month due to a tax-fraud conviction, had previously slurred Schulz by describing him as a guard in a Nazi death camp during the Second World War.
That came during an angry exchange between the two, who have clashed often, in the European Parliament in June 2003.
Germany dismissed Berlusconi's comments as being beneath official notice.
A spokesman for Chancellor Angela Merkel, Steffen Feibert, on Monday said the claim "was so absurd that the German government won't comment".
Berlusconi said it was "surreal to call me hostile to the German people, my friends," after his claim that they denied the existence of concentration camps. "If I'm hostile to something it's counterproductive austerity, and rules and regulations that in my opinion are seriously flawed, which are burdening all of Europe with long-term economic stagnation," he added. Still, even his supposed political ally Jean-Claude Juncker, the centre-right European People's Party (EPP) presidential candidate, demanded Berlusconi apologize for the concentration camps remark.
"Berlusconi's statements nauseated me. I call on him to take them back immediately and apologize to Holocaust survivors and German citizens," said Juncker, former Luxembourg prime minister. The EPP, which counts Berlusconi's Forza Italia party among its members, is currently the largest grouping in the European Parliament.
Berlusconi sparked a similar storm late last year over remarks that his adult children told him they feel like Jewish families must have under Hitler because of the alleged judicial persecution against him.
"My children say they feel like the Jewish families must have felt in Germany during Hitler's regime," the media mogul told journalist Bruno Vespa in an interview for a book. The ex-premier was quickly lambasted by prominent members of Italy's Jewish community, who denounced his comparison of his wealthy family with the Jewish people under the persecution of Hitler.
Berlusconi's list of present legal woes is lengthy: he is set to serve one year of community service for a four-year tax-fraud sentence - cut by an amnesty - which also carries a ban from office; he is appealing a six-year sentence for sex with an underage prostitute and abuse of power to cover it up, and is also on trial for allegedly bribing a centre-left Senator to switch sides.
Throughout more than 20 legal cases since he first swept to victory in 1994, Berlusconi has said he is the victim of left-wing elements in the judiciary.