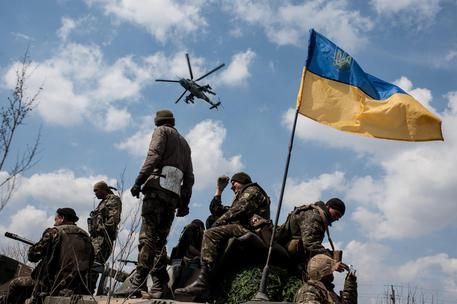 (ANSA) - Kiev, April 23 - Russia is ready to respond to the unfolding crisis in Ukraine as it did in Georgia in 2008 if its 'legitimate' interests are attacked, Foreign Minister Serghiei Lavrov said Wednesday. "If we are attacked, we would certainly respond," Lavrov said.
"If our interests, our legitimate interests, the interests of Russians have been attacked directly, like they were in South Ossetia for example, I do not see any other way but to respond in full accordance with international law," continued Moscow's chief diplomat.
In summer 2008 Russia attacked Georgia after Georgian troops moved against pro-Russian rebels in the separatist South Ossetia region.
South Ossetia has had de facto independence from Georgia since 1992, since Russian peacekeeping troops have been present.
In the present crisis, Russia has massed thousands of troops along Ukraine's eastern border and is accused of backing an armed revolt by pro-Russian militants in the Donetsk and Luhansk regions after supporting the secession of, and subsequently annexing, Crimea in March. Lavrov also accused the United States of "running the show" in Ukraine, where Vice President Joe Biden met with the country's interim authorities on Tuesday. Later that day Ukraine's interim President Oleksandr Turcinov ordered the resumption of military operations against the militant campaign in a move which Lavrov described as "quite telling".
"There is no reason not to believe that the Americans are running the show," he said.
Also on Tuesday American journalist Simon Ostrovski was kidnapped by pro-Russian militants in the eastern city of Sloviansk, a flashpoint in the crisis. His colleagues at Vice News said they were in contact with the US State Department and other government authorities to ensure his safety.