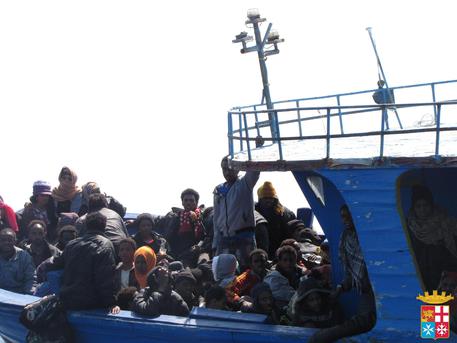 (ANSA) - Rome, April 21 - Italy must suspend its rescue operations for the thousands of migrants who arrive by boat on the country's southern-most shores, Northern League secretary Matteo Salvini said Monday. In an interview with ANSA, Salvini said the operations are too expensive and represent an "invasion" of Italian shores.
He said that his party will present a proposal to the Lower House and the Senate to suspend the Mare Nostrum sea operation that Salvini says costs about 300,000 euros daily.
"That will end the financing of (human) smugglers and the invasion of our shores," said Salvini, who added that he is planning an election campaign visit to Sicily.
Last month, Salvini called on allies across Europe to join in fighting "mass immigration" in the lead-up to May's European Parliament elections.
Salvini, whose party has taken strong stances against immigration, has said he was confident that such groups would unite in their opposition to the euro and European institutions to sweep elections in May.
Immigration has been a hot-button topic in Italy as thousands of migrants arrive on the country's southern shores, fleeing violence in the Middle East and North Africa, often by rickety sea vessels.
Many others die attempting the crossing in often unstable vessels.
Boat arrivals in Italy more than tripled last year from the previous year, fuelled by the conflict in Syria and strife in the Horn of Africa.
After some 400 people drowned in two migrant-boat disasters within sight of the southern Italian island of Lampedusa in October 2013, Italy set up a surveillance and rescue operation called Mare Nostrum to prevent further deaths at sea.
In response to the rising levels of dangerous migration, the United Nations High Commissioner for Refugees (UNHCR) has said that Italy must have more financial help.
The UNHCR has said that the Mediterranean is one of the busiest seas in the world, and urged European Union members to work together on solutions to the migrant situation, which is expected to worsen.