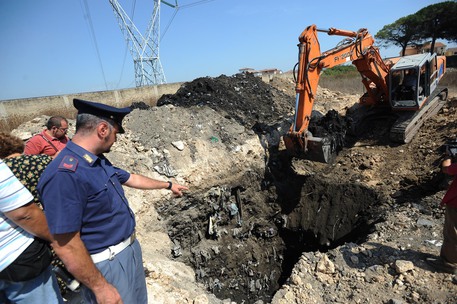 (ANSA) - Taranto, April 18 - Italian police on Friday impounded an illegal-waste dump near the southeastern Puglia city of Taranto.
Police said the dump contained at least 100 tonnes of so-called 'special' or highly toxic waste. The operation, in the countryside near the town of Faggiano, uncovered the smelly eyesore amid a pristine, rolling landscape of olive trees and vineyards, police said.
Police said they had opened a probe to see if local aquifers had been tainted.
Two people, with suspected mafia links, were cautioned.
The Puglia mafia, Sacra Corona Unita (SCU), is known to traffic waste like its bigger and more dangerous cousins, the Camorra around Naples, the Calabria-based 'Ndrangheta and Cosa Nostra in Sicily.
Naples, the capital of Campania, has been dogged by years of waste crises.
Illegal waste disposal and trafficking are major mafia money-spinners and whole areas of the south, such as Campania's Terra dei Fuochi (Land of Fires), have been contaminated with toxic landfills, often set ablaze by frustrated locals.
Taranto, a major port, has been at the centre of a longstanding row pitting job security against environmental and health concerns after its huge, polluting Ilva steel plant was partially closed due to unusually high local cancer rates.