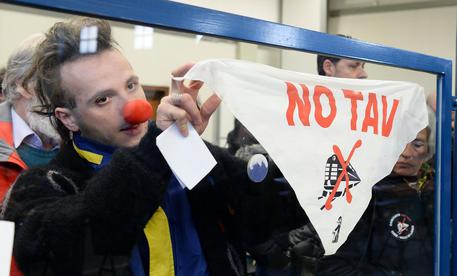 (ANSA) - Turin, April 17 - It was business as usual for Gemma Amprino, mayor of the Piedmont town of Susa in northwestern Italy, on Thursday after a parcel containing a bullet and written threats was mailed to her by opponents of a controversial high-speed rail (TAV) link between Turin and Lyon in France that is due to pass through the area. "The best response to what happened is to live as if these things did not exist," said Amprino, whose pro-TAV position is well known. "The only way to give voice to democracy is to keep going," she added. The threat letter, which was also mailed to the local councillor responsible for transport, Salvatore Panaro, came at the start of the campaign for administrative elections on May 25 in which positions for and against the Turin-Lyon rail link are expected to feature prominently. Transport Minister Maurizio Lupi, Piedmont regional president Roberto Cota and Turin provincial president Antonio Saitta all expressed their solidarity with Amprino and Panaro over the incident. Originating as a spontaneous grass-roots movement centred on Val de Susa in the 1990s, the No-TAV movement now has national and international visibility, organising largely peaceful demonstrations and other acts of protest up and down the country.