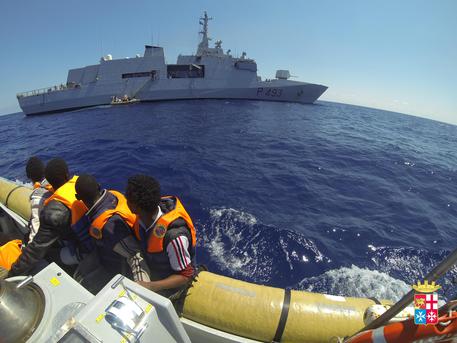 (ANSA) - Brussels, April 17 - European operations to combat illegal immigration in Italian waters have been allocated 7.1 million euros for the period May-September, sources close to the European Union agency for external border security FRONTEX said Thursday. There are currently two Frontex operations underway in Italy: Hermes and Aeneas, respectively covering the southern Mediterranean between Italy and North Africa and the Adriatic and Ionian seas.
So far this year these have been running thanks to 4.8 million euros carried forward from the November 2013 budget after the agency received additional funds following boat accidents off the Sicilian island of Lampedusa last October in which over 350 migrants are known to have died. The total Frontex budget for 2014 was 89.1 million euros, the agency said. Of this sum, 42.1 million was destined for operations, of which just over half was for sea operations.
The Frontex-sponsored operations are in addition to Mare Nostrum, a military and humanitarian operation launched by the Italian navy and coast guard last autumn in the wake of the Lampedusa disaster to spot and save migrants at sea.
On Tuesday Interior Minister Angelino Alfano told parliament over 20,500 migrants had landed on the Italian coast so far this year, as compared to 2,500 during the same period in 2013.
Speaking before a committee on the country's borders, Alfano stressed that the number of incoming migrants was on pace "to reach the record levels of 2011, when more than 62,000 people entered".