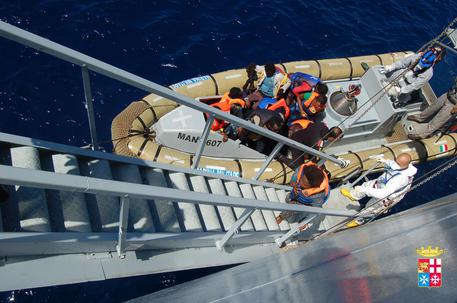 (ANSA) - Rome, April 15 - A centre-left MP on Tuesday called on the interior and health ministers to explain why a 29-year-old Gambian migrant died of a heart attack while being held in a migrant reception center just three days after he landed on Italy's shores.
The young man reached the coast of Sicily on April 11. He was transferred to a migrant holding center near the city of Siracusa in spite of the fact that he was clearly experiencing some form of medical distress, including blurred vision, according to International Organization for Migration (OIM) staff members who were present on the docks when he landed and who had urged government personnel to hospitalize him.
He finally saw a doctor three days later, when he was taken to an emergency clinic within the holding center while already in full cardiac arrest. He died Monday.
"We want to know why he was not taken to hospital where he might have received potentially life-saving treatment," said Khalid Chaouki of the ruling Democratic Party (PD), and who filed the motion with fellow MPs. "This incident shows that reception facilities are often incapable of recognizing the primary needs of migrants. We need to rethink them," added the Moroccan-Italian MP, an outspoken defender of immigrants' rights who just before Christmas last year barricaded himself for days inside a migrant holding center on the island of Lampedusa to protest conditions there.
Local prosecutors have launched an investigation into the young man's death, Corriere del Mezzogiorno newspaper reported.