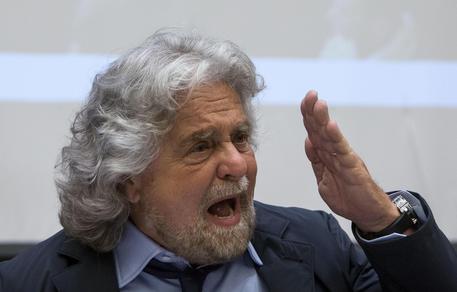 (ANSA) - Rome, April 15 - Gadlfy comedian-turned-politician Beppe Grillo on Tuesday blamed the press for painting him as an anti-Semite, after he outraged Jewish leaders on Monday with a blog post in which he borrowed from a classic Holocaust memoir to attack opponents including Premier Matteo Renzi and President Giorgio Napolitano.
"Thanks to Italian media, I was dubbed a fuhrer by German papers," the leader of the anti-establishment, anti-euro 5-Star Movement (M5S) told a Lower House press conference.
Grillo, whose blog is the fulcrum of his Internet-based political movement, titled his post 'If This Is a Country' - a play on Holocaust survivor Primo Levis's classic work, If This Is a Man.
Levi, a Jewish-Italian writer, wrote his masterpiece memoir about the year he spent in the Nazi's Auschwitz death camp after his arrest as a member of the Italian anti-Fascist Resistance during the Second World War.
Renzo Gattegna, president of the Union of Italian Jewish Communities, slammed Grillo's post as an "infamous provocation...an obscenity about which one cannot be silent".
The vitriol-tongued M5S leader proceeded to lash out at journalists, whom he blames for publishing what he calls "government lies".
"How can you be asking such stupid questions? Newspapers are living on borrowed time: you'll be looking for another job," he promised them.
In a reference to the saga of tax-fraud convict and billionaire ex-premier Silvio Berlusconi, who is being allowed to serve the remainder of his four-year suspended sentence doing community service, Grillo went on to urge Italians to dodge taxes.
"He dodged millions in taxes, and all he has to do is spend half an hour a week at a senior center. I tell everyone: go ahead and dodge as much as you can, it's a good investment," Grillo said.
"Berlusconi is banned from public office, but gets to meet with the president of the Republic (Giorgio Napolitano) anyway," added the comedian, who is also banned from running for office after a 1980 vehicular manslaughter conviction for a car accident in which he was the driver and three passengers died. In spite of his conviction, Grillo has himself met with Napolitano after his M5S movement was catapulted to being the number-two party in the last general elections. Grillo also said the government's proposed new election law, which is designed to produce a clear winner in the next national vote, is stillborn.
The so-called Italicum bill, stemming from an agreement between then-centre-left Democratic Party (PD) chief Matteo Renzi, now premier, and centre-right leader Silvio Berlusconi, is slated to go to the Senate for scrutiny.
"The Italicum is a non-starter, because they know the M5S will vote it down," he said.
Also on Tuesday, the leader of the anti-immigrant National Front (FN) party in France, Marine Le Pen, said she had approached Grillo about forming an alliance because he is among "those who are sincerely aware of the dramatic situation of our peoples thanks to the EU, and who want their country to return to sovereignty".
Grillo turned the proposal down.