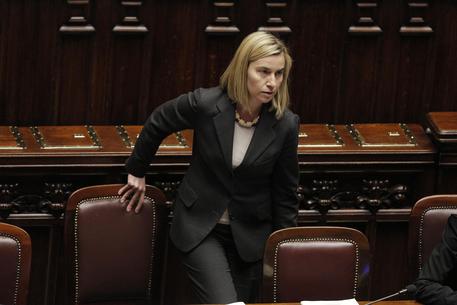 (updates previous) (ANSA) - Luxembourg, April 14 - It is not yet time to launch a third set of sanctions against Russia over the Ukraine crisis, Italian Foreign Minister Federica Mogherini said Monday. "No, I don't think so," Mogherni told reporters when asked about the widely mooted sanctions to help curb alleged Russian ambitions as pro-Moscow activists defy Ukraine authorities in the east of the country. But the escalation of the conflict, with deadly clashes between Ukraine soldiers and pro-Russia activists two weeks after the annexation of Crimea, "is a situation that worries us very much in the evolution of these hours and days," she said on the sidelines of a European Union foreign ministers' meeting.
"Italy, along with the EU, will do everything possible so that there is responsible behavior in these hours both inside and outside the Ukraine.
"Italy has insisted on the path of dialogue from the beginning. We will continue to think that it is the only path possible, just as the situation on the ground appears to be degenerating. This is our commitment and our work for today".
An "anti-terrorist" regime was declared earlier Monday by the Kiev-appointed Donetsk governor Serghiei Taruta when an ultimatum to pro-Russian demonstrators occupying public buildings in eastern Ukraine expired, reported Interfax.
British Premier David Cameron and French President Francois Hollande on Monday called for dialogue and condemned the ongoing violence in eastern Ukraine, while Belgian Foreign Minister Didier Reynders called for new EU sanctions as he arrived at the Foreign Council meeting in Luxembourg.