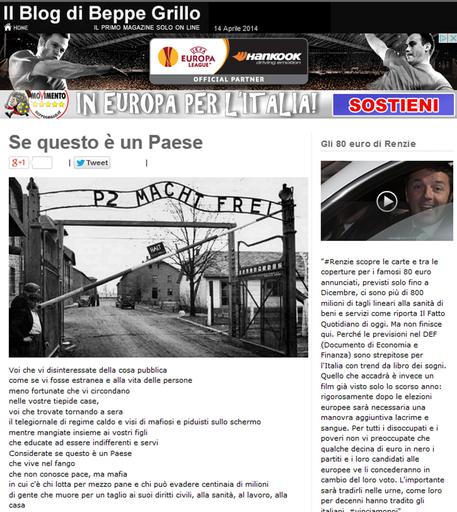 (ANSA) - Rome, April 14 - The anti-establishment M5S leader, Beppe Grillo, outraged Italy's Jewish community Monday with a blog poem entitled "if this is a country" - a play on Holocaust survivor Primo Levis's classic If This Is A Man - in which he called President Giorgio Napolitano "a frightened old buffer" who "ignores the Constitution". Former comedian Grillo, whose movement captured a fourth of the vote at last year's general electiion, decried Italy as a country in the hands of the mafia and the now-disbanded subversive P2 masonic lodge, which he said had chosen a leader who was "a vulgar liar," and a "provincial buffoon," referring to Premier Matteo Renzi, the Democratic Party (PD) leader and former mayor of Florence. The ditty's title, inspired by Jewish-Italian writer Primo Levi's masterpiece memoir about the Auschwitz Nazi death camp, was surmounted by a copy of the famous photo of the gates of Auschwitz with the phrase "P2 Macht Frei" superimposed instead of the original Nazi slogan "Arbeit Macht Frei," (Work makes you free).
The secret Propaganda Due (P2) Masonic lodge was banned as a threat to an open society after a membership list was discovered by magistrates in 1982 containing names of nearly 1000 Italian politicians, generals, police officers, journalists, judges and businessmen.
Italian Jewish Communities President Renzo Gattegna slammed Grillo's outburst as an "infamous provocation" and "an obscenity about which one cannot be silent".
The long blog poem was intended to "arouse the lowest anti-semitic feelings to take advantage of popular discontent intensifying at this time of economic crisis," said Gattegna. "This is a criminal profanation of the value of the Memory of millions of innocent victims that offends all Italy".
Grillo has repeatedly and vainly tried to have Napolitano impeached for allegedly overstepping the limited scope of his Constitutionally mandated powers. He has slammed Renzi for allegedly promising sweeping changes without delivering, despite the PD leader's only being in office two months, and has likened him in this to former centre-right premier Silvio Berlusconi.