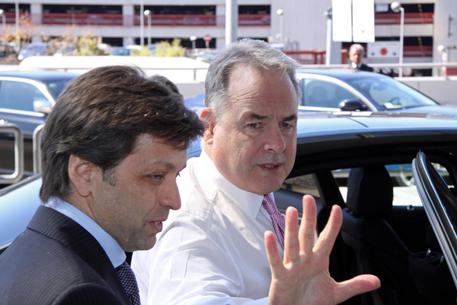 (See related) (ANSA) - Rome, April 11 - A letter of intent that would see Etihad Airlines take a significant stake in troubled Italian flag carrier Alitalia could come as early as Monday, Transport Minister Maurizio Lupi said Friday.
Lupi met with Etihad Chief Executive Officer James Hogan earlier in the day, after meetings Thursday night between the CEO and Italian Premier Matteo Renzi.
Sources said that following that session, an investment deal that would see the Abu Dhabi-based airline inject as much as 300 million euros into Alitalia in return for a stake of about 40% was "close".
The major stumbling block, they said, is the number of layoffs that the deal would entail.
Earlier this week, Lupi said that Etihad Airlines had finished its "due diligence" in examining Alitalia's accounts. Investments in troubled Alitalia have been controversial, as rival carriers have complained that deals could contravene European Union regulations on State aid. That is the basis of a complaint by German carrier Lufthansa about the Etihad investment while the owner of British Airways has raised the same rational for its complaints about a rescue plan coordinated by the Italian government late last year.
That plan included a controversial 74-million euro investment by Italy's state-owned post office Poste Italiane.
International Airlines Group (IAG), the holding company that owns British Airways, Iberia and Vueling called that a form of protectionism and said it was illegal under EU laws governing State assistance to businesses.
Meanwhile, in early April the European Commission warned Italian authorities to be careful to follow EU rules on ownership and control of European companies, and investments involving carriers from countries outside of Europe with reference to Etihad.
The Gulf carrier was drawn to Alitalia as it is vying to broaden its network in Europe.
Etihad has been expanding aggressively into Europe, and Alitalia would give it a further foothold in a lucrative market.
After buying 29% of Air Berlin, Germany's second-largest airline, in 2011, Etihad has taken stakes in carriers across the world, including Air Serbia, Aer Lingus, Darwin Airlines, Virgin Australia, Jet Airways and Air Seychelles.