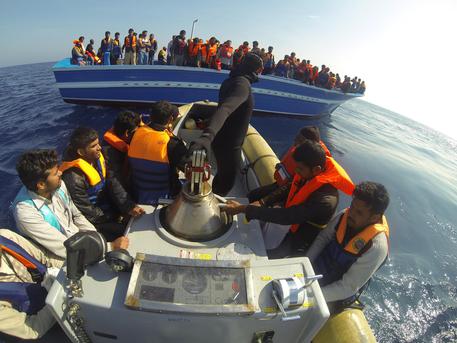 (ANSA) - (On board the San Giorgio cruiser), April 11 - The Italian navy rescued 800 North African immigrants off the coast of Libya Thursday night in the latest in a string of pick-ups off rickety boats that have been launched like flotillas during the recent spell of warm weather. The migrants were on board seven rust-buckets and latge dinghies that were intercepted by four Navy frigates and a Finance Guard motorboat about 70 nautical miles south of the stepping-stone Italian island of Lampedusa, which is closer to Libya than to Sicily.
The asylum seekers were transferred to the large Italian cruiser San Giorgio which is expected to dock in a Sicilian port later Friday.
Earlier this week Italy issued a fresh call for help from the European Union after rescuing more than 4,000 migrants in 48 hours.
Interior Minister Angelino Alfano said in a radio interview Wednesday that "with the fine weather, the next six months are going to be extremely tough".
He said most migrants now disembarking on Italy's shores are political asylum seekers, and Europe must give Italy a bigger hand in processing and relocating them.
"Hundreds of thousands are in Libya waiting to get on a boat", Alfano told Sole 24 Ore financial paper's Radio24.
"It is of the essence that the international community set up refugee camps as well as bilateral control over coasts and departures".
The minister's comments followed news that Italian authorities rescued some 4,000 migrants off several unseaworthy boats in the past 48 hours.
Every year, tens of thousands of migrants arrive in Italy, which is the first landfall for those trying to reach Europe by boat from North Africa.
Many die while attempting the hazardous crossing in rickety, overcrowded vessels after being charged exorbitant prices by human traffickers.
After some 400 people drowned in two migrant-boat disasters within sight of Lampedusa in October 2013, Italy set up a surveillance and rescue operation called Mare Nostrum to prevent further deaths at sea.
"We are rescuing thousands of migrants with our ships", Alfano continued.
"We must speed up procedures to expel those who have no right to stay, and to receive those who have a right to asylum".
Some 15,000 migrants have landed on Italy's coasts since the beginning of the year, Alfano said.
"Most asylum seekers don't even want to stay in Italy.
Other countries must take these people in, because that's where they wanted to go in the first place", the minister explained.
"Europe must understand that we can't take them all in.
And the EU needs to boost our border defense system", said Alfano.
He went on to blast critics in the anti-immigration Northern League, which sponsored a law making illegal immigration a crime that was recently repealed.
"I would remind them that the migrant influx peaked in 2011, just after illegal immigration was criminalized", the minister said.
Also on Wednesday, the chairman of the Senate human rights commission rebuffed the minister's claims that Italy is under attack by a wave of migrants.
"This is not an invasion. We've known for a long time that this was going to happen", said Senator Luigi Manconi of the ruling Democratic Party (PD) "We should take a serious look at ourselves and at the reasons why we failed to take the necessary steps to receive people we can easily take care of, without involving other European countries".
"Italy must do its part, and on this matter our conscience is not as clear as it should be", he added.
The country must put its own house in order, both in terms of domestic policy and of international treaties it has signed on to but doesn't always respect, the PD Senator pointed out, echoing many previous calls.